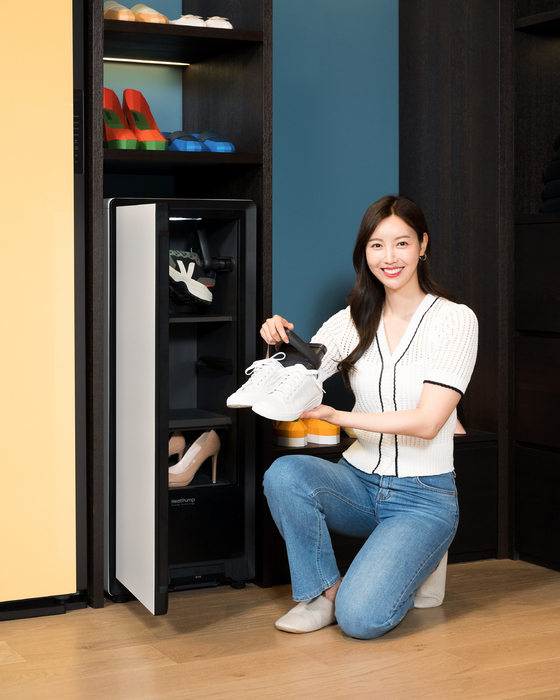 
Samsung Electronics has invented a new appliance, the Bespoke ShoeDresser, and it went on sale in Korea, Thursday.

The device looks like a wine fridge, but its technology is based on that of the AirDresser—an apparel care system that steams clothes on a rack.

The ShoeDresser blows air to remove dust from shoes and uses ultraviolet light to kill germs on shoes. It was first showcased at the CES electronics trade show in January last year.

The electronics maker said a particular emphasis was put on the appliance’s function to remove odors -– which customers voted as the biggest concern in maintaining shoes at home.

The ShoeDresser has three shelves with shoe racks. These “Jet Shoe Tree” racks shoot air inside the shoes and remove odor-causing elements. The racks themselves can be removed from the appliance.

On the top shelf, a “UVC lamp” is installed to kill viruses and harmful germs. UVC refers to ultraviolet light with wavelengths between 200 and 280 nanometers, which is known as most effective at killing germs

Approved by Intertek, an international certification company based in London, the Bespoke ShoeDresser can kill 99 percent of the most common hazardous viruses encountered in day-to-day life, including the influenza A virus and porcine enterovirus.

The ShoeDresser can clean three pairs of shoes at once. It also offers an option of cleaning courses optimized to the type of shoe, including wet sneakers, rain boots and hiking boots.


The product comes in four colors: white, charcoal, green and yellow. The price ranges from 999,000 to 1.09 million won ($975) depending on the color. Motors and compressors can be fixed or changed for free, without limit.

The ShoeDressers may be used in venues like major hotels, cinemas and golf clubs in the near future, as the company said it plans to organize try-out booths.