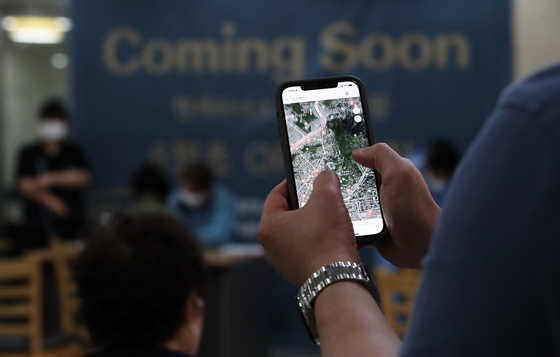 A person searches for clinics with left-over Covid-19 shots on his mobile app through a reservation system launched on Thursday, in Seodaemun District, western Seoul. [NEWS1]


The reservation system for left-over Covid-19 vaccines was extremely popular on its first day, with younger members of the public trying to join their elders in getting inoculated — to enjoy the promised benefits.

Thirty-six-year-old Mr. Seo, who works in Mapo District, western Seoul, got the last left-over AstraZeneca vaccine at a medical clinic near his office on Thursday.

"I clicked on both Naver and Kakao as soon as it turned 1 o'clock, but all the clinics around me had already ran out of vaccines," Seo said. "After waiting about 40 minutes, an available dose popped up and I made a reservation at the clinic right away."

From 1 p.m. on Thursday, people could start checking if any vaccine doses were available in nearby clinics and hospitals through Naver and Kakao, and make a reservation for the same day.

Regular vaccine appointments are only being given to people aged 65 and over, front-line health workers and essential personnel such as police, firefighters and soldiers. But demand has been slack and some vaccines have gone to waste. As a result, a new system was devised for younger people to get leftover vaccines that must be used quickly.

Operated through Korea's top internet companies, Naver and Kakao, appointments are open to anyone, including foreigners, who is 30 years old or older — born before Jan. 1, 1992 — and covered by Korean health insurance.

"I always wanted to get the vaccine, but the vaccination incentives that the government announced yesterday — especially the lifting of bans on immediate family gatherings — really triggered me," Seo said.

On Wednesday, Korea announced new incentives to encourage more people to get vaccinated.

Starting in June, people who have gotten at least one dose of a Covid-19 vaccine at least 14 days earlier will be exempt from restrictions on private gatherings of immediate family members. The current limit for family gatherings is a maximum of eight people.

In addition, they will be able to take a walk on the street or exercise in parks or on hiking trails without wearing masks from July. 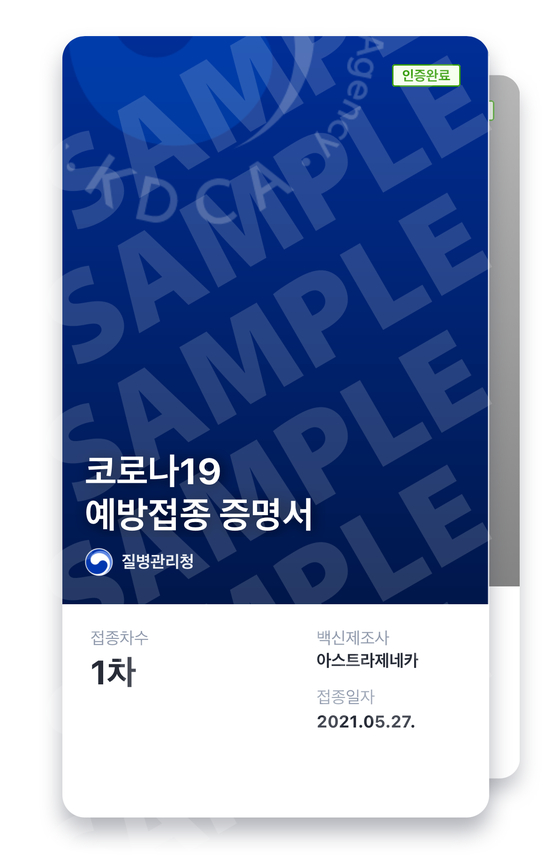 A digital vaccine certificate sample from the mobile application COOV. By showing the certificate, people can get incentives. [SCREEN CAPTURE]

On Naver, the number of available left-over vaccines showed up as zero in most medical clinics in Seoul because of heavy demand.

"We only have a limited number of doses for people who already made reservations," said a medical clinic in Mapo District, Seoul. "As of today, all the people with reservations showed up, and we rarely have any left-over vaccines."

The system on KakaoTalk, the most-used messenger app in Korea, froze for nearly 30 minutes. As connection errors continued, Kakao deleted the "Left-over vaccine" page on the (#) tab and re-opened it later.

System errors were experienced at the medical clinics as well.

"While I was waiting for my inoculation, people who said they reserved online kept coming in, but the reception desk said they couldn't find the reservations," Seo said. "So they had to turn away two people [as far as I saw.]"

Thursday was the first day that people aged 65 to 74 could be vaccinated, and medical institutions were jammed. Korea recorded the highest number of newly vaccinated people for a single day — more than 640,000, according to the Covid-19 Vaccination Task Force. The previous record was 307,000 on April 30.

"I have to get inoculated anyway, and I thought I would get it on the first day," said Mr. Choi, 72, who lives in Goyang, Gyeonggi, after getting his first AstraZeneca shot. "I feel relieved that I've got it."

When Choi arrived at a hospital at 9 a.m. for his appointment, there were already about 10 people waiting.

Ms. Hwang, 70, booked her vaccination the first day reservations began for her age group, which was on May 6. She got her shot Thursday with her husband.

"The sooner we get the vaccine, the sooner the pandemic will end," she said. "I sent the vaccination reservation link to my friends to get them to cooperate quickly."

A local clinic in Gwacheon, Gyeonggi, were short-handed and had to hire a temporary doctor to take charge of preliminary medical examinations. The clinic was scheduled to start vaccinations from 9 a.m., but was already crowded at 8:30.

"We will make sure that the first round of vaccinations for senior citizens will end safely by the end of June," said Jeong Eun-kyeong, commissioner of the Korea Disease Control and Prevention Agency (KDCA), who witnessed inoculations at a hospital in Cheongju, North Chungcheong, on Thursday.

"Vaccines are not only a way to protect each person's safety and daily life, but also to lift the sacrifices and trouble more quickly."

While Covid-19 vaccinations are in full swing for the elderly, the government announced it will expand inoculations to people in their 50s as well as to high school senior students and teachers.

"We will first inoculate those aged between 50 to 59 in July, and then inoculate high school seniors and College Scholastic Ability Test [CSAT] test takers, and elementary, middle and high school teachers," said Kim Ki-nam, an official from the Ministry of Health and Welfare, during a regular briefing on Thursday.

"We will let them make reservations online like we did it for those over 60."

Health authorities said they will elaborate on vaccination plans for the third quarter after the delivery schedule for vaccines after July is finalized. 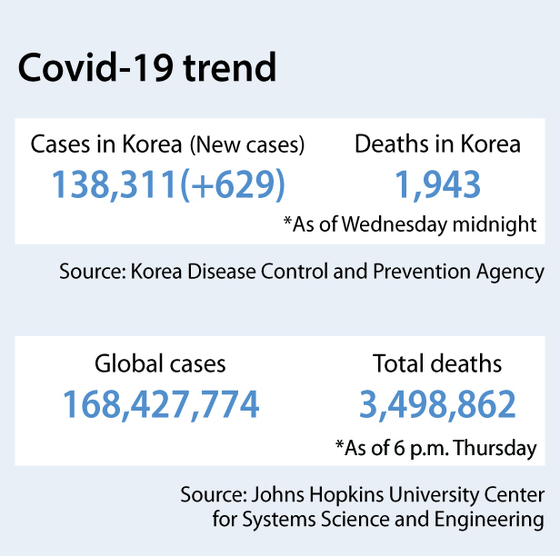 The country reported 629 new Covid-19 cases on Wednesday, slightly down from the previous day, including 620 local infections, raising the total caseload to 138,311, the KDCA said.

There were three additional virus deaths, raising the total to 1,943.