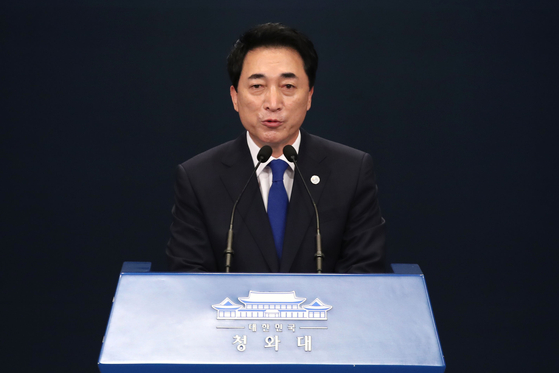 Park Soo-hyun talks to reporters at the Blue House Press Center on Friday after President Moon Jae-in named him as the new senior presidential secretary for public communications. [NEWS1]


President Moon Jae-in on Friday brought Park Soo-hyun, his first presidential spokesman, back to the Blue House by appointing him as senior secretary for public communications.

Park, a former lawmaker who represented Gongju, South Chungcheong, will succeed Chung Man-ho, who served the post for less than 10 months. Park is a key Moon ally who served as the presidential spokesman from May 2017 till February 2018. He left the Blue House to run for the South Chungcheong governorship in 2018, but dropped out. He also made two unsuccessful runs in the 2018 and 2020 legislative elections.

Nam Young-sook, ambassador to Norway, was appointed as adviser to the president for economic affairs. She was a professor at the Graduate School of International Studies at Ewha Womans University in Seoul.

Presidential Chief of Staff You Young-min said the reshuffle is intended to maintain stability in state affairs while creating a new driving force in the final months of Moon’s presidency. Moon’s presidential term ends in March next year.

In addition to the replacement of three senior secretaries, Moon appointed five secretaries.

Lee Kyung-yoon, a senior official of the Asia Culture Institute, was appointed as the presidential secretary of culture, filling the vacancy created by the resignation of Jun Hyo-gwan. Jun was named to the post in March, but stepped down earlier this month over an allegation of a conflict of interests.

Moon named Chung Choon-saeng, a public affairs worker of the ruling Democratic Party, as his new secretary of gender equality and family affairs.

Moon, however, kept Blue House aides who are either on a trial or undergoing a criminal investigation.

Lee Jin-seok is currently standing trial after the prosecution indicted him in April for allegedly abusing his power to help Moon’s friend, Song Cheol-ho, win the Ulsan mayoral election in 2018.

Lee Kwang-cheol is being probed by the prosecution for suspicions that he had arranged an illegal travel ban on former Vice Minister of Justice Kim Hak-eui in 2019. He was questioned by prosecutors in April.

“Lee Jin-seok was indicted, but Moon kept him because of his job related to the Covid-19 responses,” said a presidential aide. “Lee Kwang-cheol was not included in the reshuffle, because removing someone based on a mere suspicion before actually being indicted goes against our principles.”