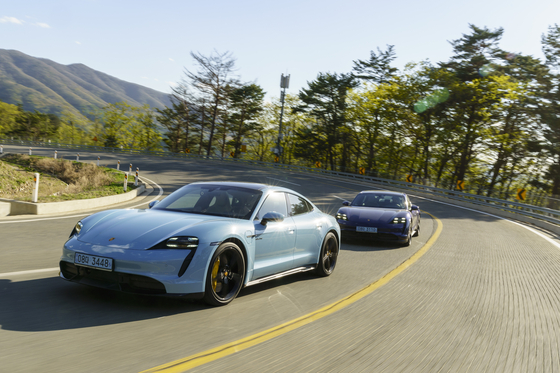 
GOSEONG, Gangwon — Despite driving a six-hour, 350-kilometer (217-mile) course on steep, windy roads, the Porsche Taycan 4S still had some juice left in its battery.

The model, which had no problem tearing through the mountains of Goseong, Gangwon, has been approved as a 289-kilometer range vehicle by Korea's Ministry of Environment. It is clearly capable of a lot more than that.

Porsche Korea recently held a test drive session for the Taycan 4S, the basic trim of the German carmaker's first-ever pure electric model, to brush off skepticism about its official range and claims that it falls short of other options on the market.

In fact, most EVs that launched recently in Korea, including the Ioniq 5 from Hyundai Motor and the EV6 from Kia, have the environment ministry-approved range of over 400 kilometers per charge.

The Korea JoongAng Daily recently got behind the wheel of the beautiful sky blue-colored Taycan 4S, equipped with a 93.4 kilowatt-hour (KWh) battery.

Porsche Korea was confident that its electric model can pull off a longer range than the official figure backed by the vehicle's EV technologies, such as high regenerative power. 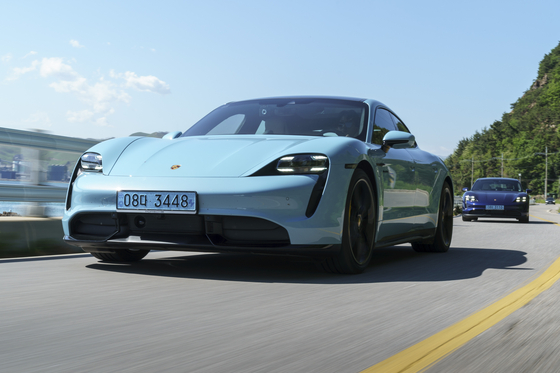 
The carmaker was so confident that it arranged the test drive route to extend as long as 350 kilometers, far exceeding the approved range, and not just that, the route encompassed some extreme sloping and winding courses.

On the starting line, the vehicle's digital cluster showed that its battery was at 97 percent with a predicted range of 448 kilometers.

The first part of the course was driven to test its performance — whether it could pull off the exhilarating acceleration and sharp cornering the typical Porsche is capable of.

It may not have that monstrous growling engine sound that petrol heads live by, but performance-wise, this Taycan 4S didn't fall short of its predecessors, hitting 100 kilometers per hour within a few seconds and far exceeding that speed without giving the driver or the passengers any feeling of uneasiness.

With the activation of the launch control button that helps the car accelerate faster, the Taycan 4S can reach 100 kilometers per hour in four seconds flat.

Its noiseless battery made it easier to reach higher speeds and stay in that speed range. The sharp electric motor sound was clearly there, but it wasn't loud enough to be concerning.

When switching to Sport Plus mode, an artificial engine grow turns on and acceleration becomes more responsive.

The Taycan also easily handled winding courses in the mountains.

With its low center of gravity, cornering at high speeds felt comfortable and even on steep uphill roads, the vehicle easily maintained its high speed.

After driving two-thirds of the 350-kilometer course, the vehicle was still left with about 50 percent of the battery capacity. It was already a surprising figure given that the air conditioner and audio were on most of the time as the test drive session took place on a hot day. 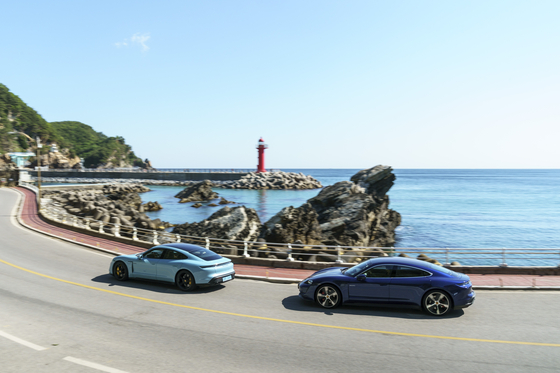 When done with the six-hour trip, covering 350 kilometers with two passengers and some great tunes, the Taycan was left with approximately 89 kilometers range.

Other reporters who drove with more people inside the car or who bounced between the accelerator and break more often were left with far less.

Porsche Korea explained that the Taycan 4S is able to generate up to 265 kilowatt-hours from the car's kinetic energy. 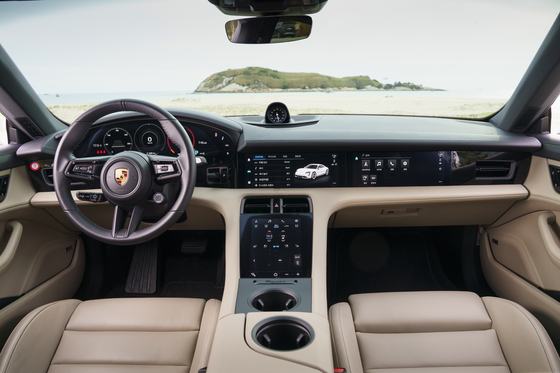 
Inside, it was apparent the vehicle prioritized performance over convenience.

While recent EVs have tended to focus on maximized the interior space due to the flat floor and increased head room, the Taycan is still, at heart, a performance vehicle.

The front row seats are snug. There was one storage space under the center console and another one under the arm rest in the front row. Convenient features such as wireless charging systems were not included.

The backseat, and the Taycan is a four-door vehicle, was small and rigid.

Despite such setbacks, the Taycan is already selling well in Korea, with 493 cars sold this year as of April.

Its price starts from 145.6 million won and it is not eligible for state subsidies.