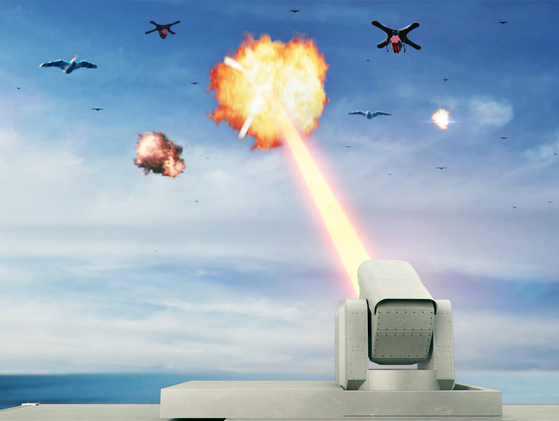 Hanwha Corporation has won a 24.3-billion-won ($21.9 million) deal to produce laser weapons that can take down drones, the company said Monday.

According to the defense manufacturer, the deal is to produce a prototype of a laser oscillator, which plays a crucial role in creating the laser beam. What decides the product’s quality is how far the laser beams can go and how destructive they are. Efforts to make smaller laser weapons with a higher performance are also underway.

The contract was placed by the state-run Agency for Defense Development, which heads Korea’s scientific research for defense weapons. Hanwha Corporation has four years to complete the prototype.

The goal of laser weapons is to take down flying objects in a fast and accurate manner. Their main targets are projectiles like missiles or small, unmanned drones, which can be difficult for conventional weapons to tackle.

Globally, laser weapons are at still in the early stage of development, with countries like the United States and Israel ramping up research and development efforts to test eligibility for use in combat. Most projects underway are prototypes, but Hanwha says recent achievements in the field show the potential for laser weapons to be powerful enough to destroy larger objects like aircraft or satellites.

The U.S. Navy, for example, announced in May last year that it successfully tested a laser-weapon that destroyed an aircraft mid-flight.

In Korea, Hanwha Corporation was the first local company to win a government deal to develop a laser weapon in 2019. Its history of developing lasers, however, dates back 20 years as the company had also produced sensors using laser technology.

“Through consistent research efforts in laser weapons, we will contribute to developing next-generation weapons for this country and create future growth engines for the company,” Hanwha Corporation said in a Monday statement.