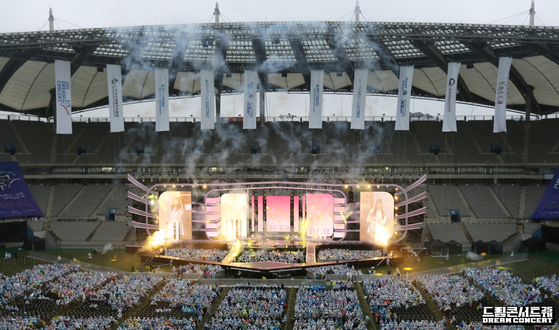 
The Korea Entertainment Producer's Association (KEPA) will hold the "27th Dream Concert" on June 26 at World Cup Stadium in western Seoul, "leaving the possibility of an offline concert open" depending on government guidelines.

For now, KEPA said that the concert will be held in an online format just as it was last year for the 26th edition titled "Dream Concert CONNECT:D."

This year's concert will use the finest technology such as VR and 4K UHD to bring the best experience to viewers.

KEPA has yet to reveal the lineup of artists.

The numbers came from the Korea Records Institute and were approved by Guinness World Records Korea.

"The Covid-19 pandemic continues, but we wish to bring hope and consolation to K-pop fans all over the world with Korea's leading artists," Im Baek-woon, the president of KEPA, said.

The goal that made me: Ahn Jung-hwan remembers moment that defined career