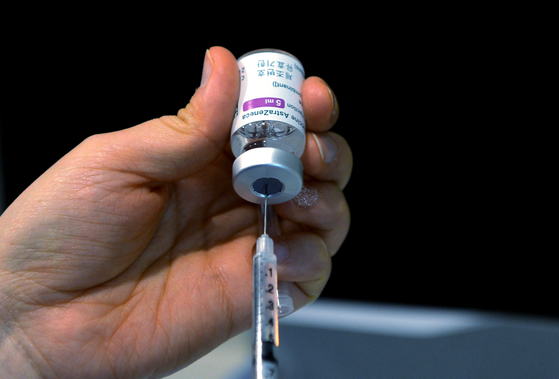 The AstraZeneca Covid-19 vaccine is prepared for injection. On Monday, Korea confirmed its first case of unusual blood clotting in someone who got the AstraZeneca vaccine. [KIM SEONG-TAE]


Korea confirmed its first case of an unusual type of blood clotting in a young man who got an AstraZeneca Covid-19 shot.

According to the Covid-19 Vaccination Task Force, a man in his early 30s was confirmed to have unusual blood clots with low blood platelets  — termed thrombosis with thrombocytopenia syndrome, or TTS — after getting the AstraZeneca vaccine on April 27.

The man had a severe headache and visited a hospital on May 9. The symptoms continued and he experienced muscle cramps on May 12 and has been hospitalized since then.

He is now in stable condition, the task force said.

There have been several blood clot cases reported after vaccinations, but health authorities concluded they were common types that could be explained. None were identified as the rare blood clotting accompanied by a drop in platelets that is listed as a side effect of the AstraZeneca vaccine.

The hospital the man went to reported the adverse reaction on May 27 and an epidemiological investigation was conducted by the Seoul Metropolitan Government. After holding an advisory group meeting on Sunday, health authorities concluded that the patient's case meets the definition of unusual blood clots with low blood platelets.

The task force said it will make compensation to the patient in a swift manner.

"Thrombosis with thrombocytopenia syndrome is a disease that can be recovered from after early detection and with proper treatment,” Jeong Eun-kyeong, commissioner of the Korea Disease Control and Prevention Agency (KDCA) said in a briefing on Monday.

“Medical treatment is recommended if you show symptoms such as severe headaches and persistent abdominal pain between four and 28 days after vaccination,” Jeong added.

It is the first blood clotting case confirmed out of a total of 3.27 million people who have received AstraZeneca shots in Korea.

According to the task force, that is 0.3 case per one million people, while the United Kingdom reported 9.5 cases per million and the European Union reported 10.

The country will closely monitor the situation and strengthen measures for early detection and treatment in cooperation with experts, the task force said.

Starting in June, people who have gotten at least one dose of a Covid-19 vaccine will be exempt from limits on private gatherings of immediate family members. The current limit for family gatherings is a maximum of eight people.

Face-to-face visits at nursing homes will be allowed for fully vaccinated people.

The country will also re-open community centers for elderly people, more than half of which were shut down due to concerns over the virus.

Entrance fees for national landmarks such as national parks and Korean palaces will be discounted or waived to encourage people to take advantage of freedoms after they are inoculated.

Starting Tuesday, Korea will start accepting reservations from military-related personnel aged 30 and older for over one million doses of Johnson & Johnson’s Janssen vaccine being sent by the U.S. government.

Groups eligible for the one-shot regimen are 538,000 military reservists, 3,040,000 civil defense corps and 137,000 people related to the country's defense and foreign affairs, such as military families.

Reservations will be taken online (https://ncvr.kdca.go.kr) on a first-come-first-served basis from June 1 to 11, and the inoculations will take place from June 10 to 20. Those who do not receive the shots in June will be inoculated in the third quarter of the year as per an original plan. 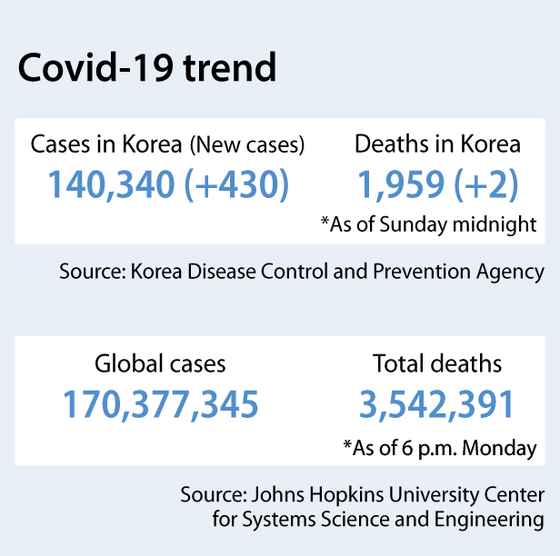 There were two additional virus deaths, raising the total to 1,959.

As of Sunday midnight, 10.5 percent of Korea's population, or 5.4 million people, had received one dose of a Covid-19 vaccine, while 4.2 percent, or 2.1 million people had been fully vaccinated.