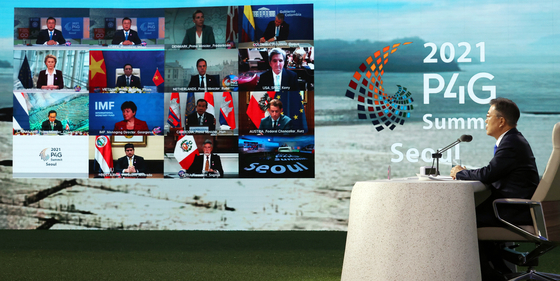 P4G, or Partnering for Green Growth and the Global Goals 2030, is a global initiative that seeks climate action through innovative public-private partnerships and aims to deliver on the UN Sustainable Development Goals (SDGs) and the Paris Agreement on climate change adopted in 2015.

The Seoul Declaration adopted at the end of the summit called for the engagement of governments, businesses and civil society as part of "collective solutions" to global climate change and to achieve green recovery for current and future generations.

It stressed that a green recovery should steer efforts to rebuild the economy after the Covid-19 pandemic and limit the temperature increase to below 2 degrees Celsius, aiming for 1.5 degrees Celsius above pre-industrial levels, in line with targets set by the Paris Agreement.

Government leaders and top officials from some 50 countries and heads of 20 international organizations, along with representatives from the business sector and civil society, took part in the conference, the first multilateral environmental summit hosted by Korea.

During the leaders' session Monday, participants discussed a green recovery from the Covid-19 pandemic, the international community's joint response to carbon neutrality by 2050 and efforts to strengthen climate action through public-private partnerships.

The summit covered five overarching themes on core sectors covered by the SDGs: water, energy, food and agriculture, cities and the "circular economy," or a system that does not dispose of consumed resources but puts them back into the economy.

"Carbon neutrality is about creating a sustainable green future," said Moon during the leaders' session, which can also be an opportunity to create new industries and jobs.

He added, "Korea stands ready to serve as a bridge between developing and developed countries to enhance international solidary and cooperation."

Moon proposed that the international community strengthen cooperation in technology, financial resources and capacity-building to achieve an inclusive green recovery, according to the Blue House.

Moon also revealed that Korea plans to strengthen cooperation with international organizations in Korea such as the Climate Technology Centre and Network, Green Climate Fund (GCF), and the Global Green Growth Institute (GGGI).

The leaders recognized the climate crisis as an "urgent global threat whose impacts reach beyond the environment agenda to include economic, social, security and human rights-related challenges."

Addressing the key themes of the summit, the Seoul Declaration encouraged sustainable water management, a transition to renewable energy sources, achieving resilient agriculture and food systems and a pursuit of smart and resilient green cities in which humans coexist with nature in harmony.

It called for more international cooperation to increase solar and wind power and the use of clean hydrogen to transition away from coal, including halting public financing of overseas construction of coal-fired power plants.

The declaration also called for a transition to a "zero-waste society," to use resources in a sustainable and efficient way and reduce plastic pollution, encouraging a circular economic system "where consumed resources are not disposed of but re-invested into the economy across the value chain."

It urged an increase in public- and private-sector funding for green investments, especially to support green transitions in developing countries.

At the summit, Korea revealed a new $4 million grant for the P4G.

Korea plans to designate May 31 as the Day of the Seas, emphasizing the importance of ocean conservation, and urged the United Nations to enhance discussions on reducing marine debris such as plastics.

The P4G Seoul Summit closed with remarks from Moon and President Iván Duque Márquez of Colombia, the host country of the third P4G summit in 2023.

The inaugural P4G Summit was held in Copenhagen, Denmark in October 2018.

The Blue House said that it hopes for the P4G Summit to be a "stepping stone" for the success of the 26th United Nations Climate Change Conference of the Parties, or COP26, to be held in November in Glasgow, Britain.