The war with food trays

The war with food trays 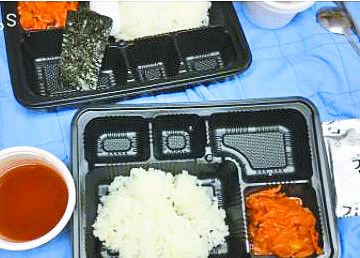 The tray has become a popular item during the pandemic. Various stainless steel tray models are sold via online shopping malls. As more people work from home, the food tray has become a must-have item to reduce dishwashing. It’s easy to find postings on social media and blogs about the trays.

The culture of family-style meals for sharing has been replaced by personal servings on trays.

The tray is a symbol of fairness. Each person can only take a certain amount of rice, soup and side dishes on one tray. The most common type tray has spaces for three side dishes. You can also find models with four or five spaces.

The military cannot do without trays. Soldiers eat their three meals on trays. The military trays have evolved so that they can accommodate more side dishes. Until the mid-1970s, the ROK Forces did not use trays. They used containers and later, a plastic tray with two spaces for side dishes, and then one with three spaces. Now, stainless steel trays with three side dish spaces are used.

There is no clear known origin for military food trays. There is a study that relates military trays to the Zen Buddhist meal service. In his book “Zen War Stories,” Prof. Brian Daizen Victory at Antioch University in the United States claimed that the tray originated from Zen Buddhist food plates. He argued that soldiers were made to feel the cold efficiency of the military combined with religious abstinence through the metal tray.

The controversy of substandard military food has escaped military camp walls. Reports of squid soup without squid or meals consisting of tomatoes continue. The Ministry of National Defense announced a plan to newly hire 900 civilian cooks in the second half of the year.

Poor meal services are not limited to military camps. We’ve frequently heard about subpar meal services at daycare centers and schools. Poor meal service controversies happen in both liberal and conservative administrations. It means that structural problems are neglected and left unsolved. Korea is struggling in the war with food trays.