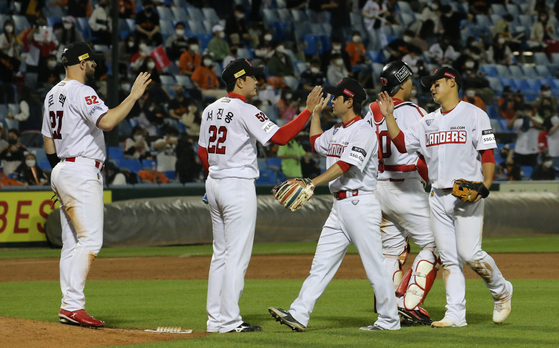 
The SSG Landers held on to the No. 1 spot after another week of KBO action, taking a two-game lead in the unusually tight competition.

The following six clubs, who all trail the Landers by just four games or less, spent another week swapping places, with only the bottom three seemingly set in stone after 45 games played.

The Landers were the only team to pick up three wins over the weekend, sweeping the Hanwha Eagles 12-3, 6-2, 5-1. The sweep cemented the Incheon club's lead — going into the weekend, three teams had been within one game of first.

The weekend series also served as the retirement ceremony for Eagles legend Kim Tae-kyun, who played for the team from 2011 until last season with a brief break while he played in Japan. To mark his retirement, the Eagles played in a retro red uniform based on the uniform they wore when he first joined the club, while the Landers wore a red No. 52 patch on their jerseys.

The KT Wiz have climbed back up to second, winning two out of their three games against the eighth-place Kia Tigers over the weekend.

The LG Twins and Samsung Lions follow tied for third, with all three teams only two games behind the Landers, but the Wiz with two games in hand. The Twins won their series against the against the seventh-place Kiwoom Heroes over the weekend, while the Lions lost their series with the fifth-place Doosan Bears two games to one.

The Bears share fifth with the NC Dinos, who picked up the only tie of the season so far against the 10th-place Lotte Giants on Saturday in the first game of a double header due to a cancelation on Friday. After tying that game 10-10 in nine innings following KBO double header regulations, the Dinos went on to win the next two games 6-2, 5-4.

The Giants have now failed to pick up a win for seven consecutive games, losing four before Saturday's tie, then dropping another two over the weekend. Unfortunately for Lotte, the only time they have managed to score more than four runs in a game during the last week was during the 10-10 tie on Saturday.

The Heroes round off the top seven at four games behind the Landers.

While the top-seven remains unusually tight, the final three teams in the KBO have started to fall away. The Tigers trail the Landers at eighth by eight games, the Eagles follow 9.5 games behind, and the Giants trail by 11.5.