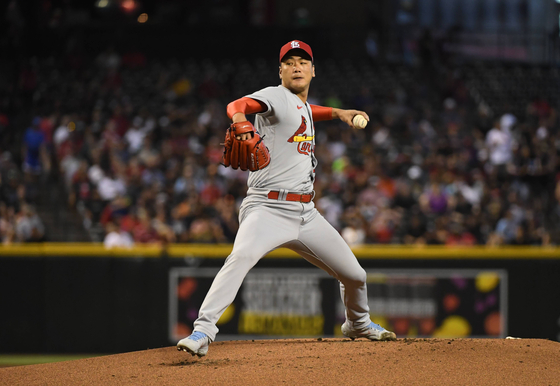 Kim Kwang-hyun of the St. Louis Cardinals delivers a first inning pitch against the Arizona Diamondbacks at Chase Field in Phoenix, Arizona on Sunday. [AFP/YONHAP]


Both Kim Kwang-hyun and Yang Hyeon-jong picked up losses on Sunday, capping off a difficult month for the MLB's two newest Korean starters.


Kim gave up four runs and a walk in five innings pitched for the St. Louis Cardinals at Chase Field in Phoenix, Arizona on Sunday. The Cardinals lost 9-2 to the Arizona Diamondbacks.

Kim only allowed a single in the first for a scoreless opening to the game as the Cardinals took an early lead with a solo homer. A triple followed by a single gave the Diamondbacks their first run in the second, but the Cardinals had also scored at the top so Kim remained ahead after allowing three hits.

A solo home run for the Diamondbacks tied things up in the third, with Kim then also allowing a single. A fielding error put two runners on base before the Korean southpaw was able to force a double play to end the inning.

Kim looked shaky in the fourth, allowing a double and a single before throwing his sole strikeout of the game. A forceout followed the strikeout, but Kim then walked a player to first to load the bases with two out. The Diamondbacks seized the opportunity, hitting a single to the outfield to bring home two runs and take a 4-2 lead.

Kim stayed on for the fifth inning, only allowing a single before he retired the side. He was replaced by Tyler Webb in the sixth. The Cardinals gave up five more runs to finish the game 9-2.

Kim picked up his first three losses as an MLB starter in May, losing three in a row including Sunday's game to take his season record to 1-3. Yet despite the losses, Kim hasn't been pitching terribly. His ERA for the month is 3.86, with 10 earned runs on 23 innings pitched. He has allowed two home runs, thrown 17 strikeouts and given up 11 walks.

Over in Seattle, Yang gave up two runs and a walk in three innings pitched for the Texas Rangers, losing 4-2 to the Seattle Mariners at T-Mobile Park in Seattle. 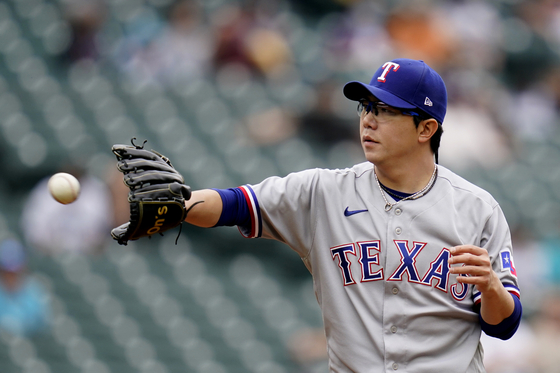 Texas Rangers pitcher Yang Hyeon-jong reaches for a ball against the Seattle Mariners in the first inning of a baseball game in Seattle on Sunday. [AP/YONHAP]


Yang got roughed up in the first inning, giving up a single, a walk and a double to give the Mariners an early 1-0 lead. He looked more settled in the second, throwing his first strikeout of the game and giving up a double, but retiring the side without trouble.

Another strikeout started the third, before a fielding error allowed a runner to reach base. Yang then gave up a single to put two runners on base, followed by another single that allowed both runners to score. A double play ended the inning and Yang left the mound with the score at 3-0.

Yang has now picked up three losses in four starts for the Texas Rangers. He has appeared in five games in May, four of them as a starter, having debuted in the position on May 5. His ERA for the month is 7.11, pushed up by the last couple of games, including an 11-5 loss to the Los Angeles Angels in which he gave up seven runs.

While for Kim the losses are undoubtedly upsetting, for Yang they could be fatal to his career as a major league starter. Kim has a solid spot in the Cardinals rotation, but Yang is currently a bullpen pitcher who has been called up to start to cover injury.

Having played for years as a starter in the KBO, Yang will be keen to secure that position. He'll need a few wins to have a chance at that happening.