Is there a Pochettino-Son reunion on the way?

Is there a Pochettino-Son reunion on the way? 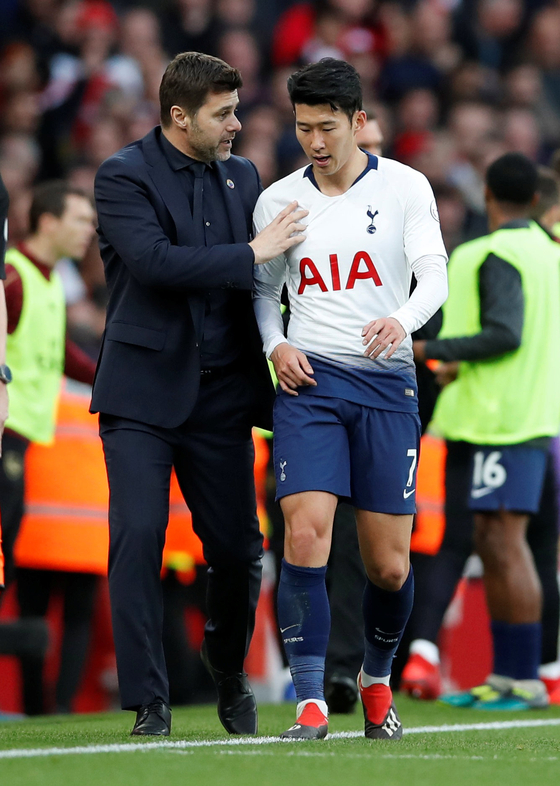 Mauricio Pochettino and Son Heung-min talk on the side of a Tottenham Hotspur game in 2018. [REUTERS/YONHAP]


Former Tottenham Hotspur manager Mauricio Pochettino has reportedly informed Paris Saint-Germain of his desire to leave the club, potentially paving the way for his return to Spurs.

The move could be good news for Korean star Son Heung-min, who joined the club in 2015 under the Argentine manager's leadership.

Goal.com reported Sunday that Pochettino, who still has a year left on his contract with PSG, has made it clear to the club that he wants to leave. Having joined the Paris club in only January this year, Pochettino led the team to a Coupe de France and Trophee des Champions double.

Pochettino managed Spurs from 2014 to 2019. He was generally successful, leading the team to a runner-up finish in both the League Cup and the UEFA Champions League, but wasn't able to break Tottenham's long-standing goal drought. He was dismissed in November 2019, as Spurs ranked 14th in the Premier League.

If Tottenham want to lure Pochettino back to the club, they will have to mend some bridges. Chairman Daniel Levy, essentially the club's owner, made it clear at the time how disappointed he was with the team's performance under Pochettino that season. His return to the club just a year and a half later would have to be on very different terms.

Spurs have recently raised £250 million through the sale of US private placements, money that could go toward bringing in a new manager. The club is also likely to use some of that money to improve Son's contract in a bid to keep the Korean forward at the club.

If Tottenham does decide to bring in Pochettino, they won't be the only team vying for the Argentine manager. Real Madrid are also reportedly interested.

Spurs have looked to other potential managers. Italian media recently reported that the club has shown interest in Inter Milan's Antonio Conte, reportedly looking to bring him in alongside Fabio Paratici, Inter's chief football officer.