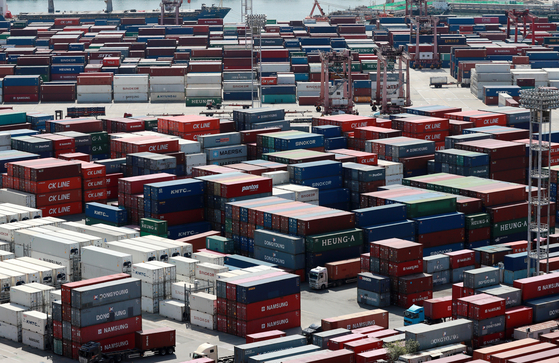 Cargo containers are stacked at a port in Busan on June 1. [YONHAP]


Korea's exports soared 45.6 percent in May, the sharpest growth since 1988 thanks to a rebound in mainstay export items including semiconductors, cars and petrochemical products.

Outbound shipments from the country totaled $50.7 billion last month, a record for the month of May, according to the Ministry of Trade, Industry and Energy on Tuesday.

This follows 41.2 percent growth in April compared to a year earlier, and was the seventh consecutive month of expansion.

The Trade Ministry said that it was the first time ever for Korea’s exports to log over 40 percent growth in two consecutive months.

The upbeat performance coincides with a widening rollout of vaccinations that allows some advanced economies to reopen businesses, fueling demand for a wide range of products and services.

The biggest export category was semiconductors, which hit $10.04 billion in May, up 24.5 percent from a year earlier.

The biggest yearly growth was seen in automobile parts, which surged 182.3 percent to reach $1.82 billion in May.

Automobile exports increased 93.7 percent to reach $3.49 billion last month as cars made by Korean manufacturers like Hyundai Motor sold well in the U.S. and Europe.

Bigger SUVs and electric vehicles drove the growth, according to the ministry.

By regions, May saw double-digit growth in Korea's three major export destinations – China, U.S. and Europe – but also in emerging markets including India and the Asean nations.

Exports to Europe equally jumped 62.8 percent to $4.9 billion, helped by the automobile and machinery sectors.

Trade Minister Moon Sung-wook noted that exports data has shown less of an overreliance on a handful of export categories like cars and semiconductors, which could mitigate underlying risks to the economy.

“Not only does the increasing growth in overall exports present an encouraging sign, but the latest figures suggest that our export fundamentals have improved,” the minister said in a statement.

“In the past, several sectors like chips and automobiles powered Korea’s exports, but recently a wider range of areas enjoyed growth, especially intermediary items whose exports climbed more than 50 percent for two consecutive months,” Moon said.

Intermediary items refer to materials or resources used to produce a finished consumer good, including petrochemicals, machinery and steel products.