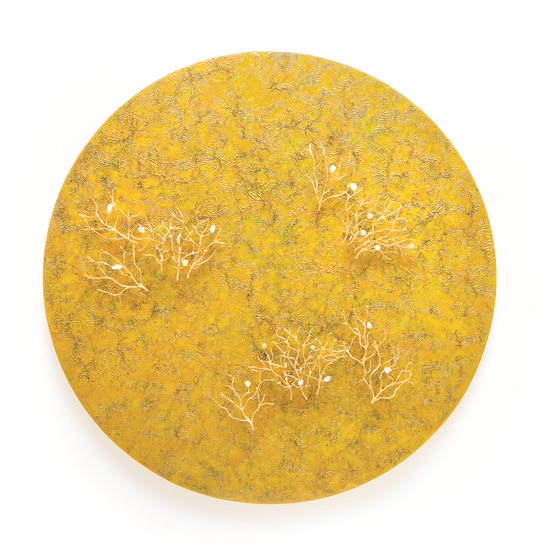 A lacquer and jewelry work in ″Talking with Trees″ series by Chae Rimm now on view at Hakgojae Gallery in central Seoul. [HAKGOJAE GALLERY] 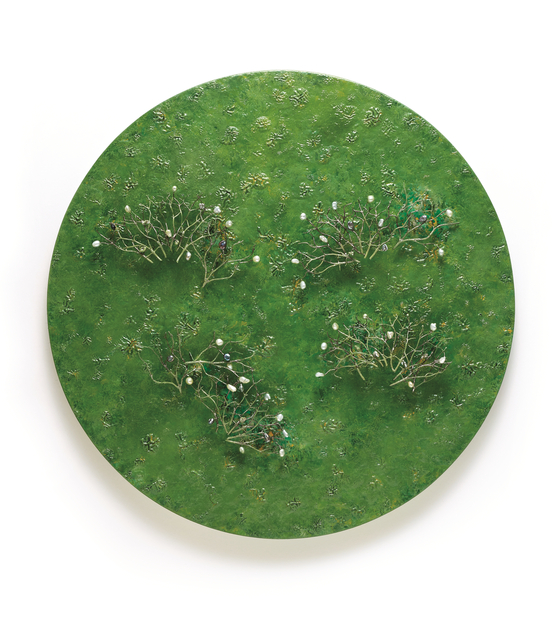 A lacquer and jewelry work in ″Talking with Trees″ series by Chae Rimm now on view at Hakgojae Gallery in central Seoul. [HAKGOJAE GALLERY]


The paintings now on view at Hakgojae Gallery in central Seoul are literally like jewels. The landscapes glimmer like enamel jewelry while some of the round-shaped paintings have golden branches dangling pearls perched on their surfaces.

Accordingly, it is no surprise that they are works by a jewelry-designer-turned artist Chae Rimm, 58. She creates the works by covering a wooden panel with hemp cloth and then painting on it with lacquer and sometimes adding jewels and precious gems like pearls.

“Jewelry is a decoration and it should be put into a jewelry box when it is not being worn,” Chae said in a press preview last month. “I didn’t like it, so I started making works with jewels that can be viewed at any time. Then, I got fascinated by Korean traditional lacquer craft and began to combine lacquer with painting.”

“Chae Rimm continuously worked with lacquer before it became a new form of contemporary art,” Lee Yong-woo, art critic and professor at Shanghai University, wrote in an essay for the show.

"Chae Rimm’s ‘lacquer painting’ is firmly rooted in tradition, but it is also evolving into something wholly original and ever more diverse. Her art attracts great attention for her elegant handling of lacquer, traditional craftsmanship underpinned by perfect technique of meticulous jewelry design, and her willingness to bring crafts and contemporary art together as one.”

The exhibition runs through June 13.