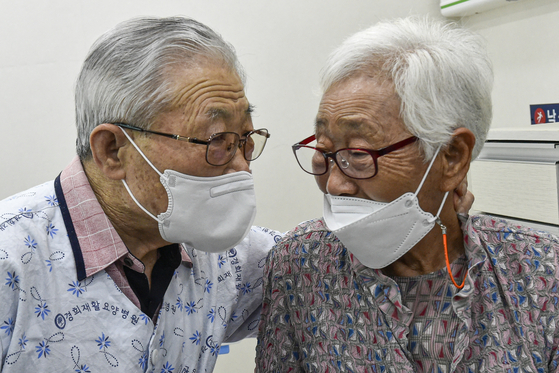 Mr. Lee and Ms. Kim, a married couple, meet for the first time since the outbreak of Covid-19 at a long-term care hospital in Ansan, Gyeonggi, where Lee is hospitalized, on Tuesday. From June, face-to-face visits in nursing homes will be allowed if either the visitor or the patient is fully vaccinated. Kim completed her Pfizer vaccination on April 30. [JOINT PRESS CORPS]

Just 18 hours later, reservations for 900,000 Janssen doses out of over one million being sent by the United States were all booked up, according to the Korea Disease Control and Prevention Agency (KDCA).

Reservations were taken online (https://ncvr.kdca.go.kr) on a first-come-first-served basis. The shots were open to 538,000 military reservists, 3,040,000 civil defense corps and 137,000 people related to the country's defense and foreign affairs, such as military families. The shots will be administered from June 10 to 20.

In Korea, men serve in reserve forces for eight years after they are discharged from their mandatory military service, and then serve in the civil defense corps, or as second-tier reservists, until the age of 40.

As soon as the reservation opened at midnight, tens of thousands of newly eligible vaccine-seekers tried to get reservations for the single-dose regimen. Before the U.S. promised the Janssen vaccines, many younger people would have had to wait for months, as Korea's system has prioritized older people. Even when they did, they would probably get the two-dose AstraZeneca or Pfizer shots.

After midnight Monday, many had to spend hours on hold or got hit with system error messages as they attempted to schedule appointments.

At one point during the night, a pop-up message showed there were over 70,000 people waiting. The waiting time was estimated at more than 50 minutes.

Claims were posted by users of a male-centered online community, FM Korea, saying some civil defense members in Yeongdeungpo District in Seoul were unable to get reservations because they were unaccountably denied.

“There were errors [while transferring] the identification numbers of about 400 civil defense members, so we updated the list again around 9 a.m. today," said Kim Ki-nam, an official from the Covid-19 Vaccination Task Force, during a briefing on Tuesday.

“I managed to book a Janssen shot around 6 a.m. this morning on my mobile phone,” said Mr. Nam, a 40-year-old civil defense member.

“I wanted to get the Janssen vaccine because it is only one-shot, and I want to take off my mask as soon as possible.”

The government announced that starting in June, people who have gotten at least one dose of a Covid-19 vaccine will be exempt from limits on immediate family gatherings of a maximum of eight people.

In addition, from July, they will be able to walk on the street without wearing a mask.

Fully-vaccinated people are currently exempted from two-week quarantine after coming from abroad, and can ignore restrictions on private gatherings of more than four people from July.

During the Korea-U.S. summit on May 21, U.S. President Joe Biden promised Covid-19 vaccines to cover all 550,000 South Korean troops.

“We'll provide full vaccinations for all 550,000 of those Korean forces engaging with American forces on a regular basis, both for their sake, as well as the sake of the American forces,” the U.S. president said.

The U.S. eventually decided to send Janssen vaccines — which are not recommended for use in Korea on people under 30 years old — and nearly doubled the volume than originally promised.

Around 116,000 Korean soldiers aged 30 and over have already received the AstraZeneca vaccine since April.

Soldiers under 30 years old, who are estimated to be around 410,000, will receive Pfizer shots in June as planned.

As a result, Korea decided to give the U.S. vaccines to military-affiliated personnel who were originally scheduled for inoculation in the third quarter of the year.

"The provision of the Janssen vaccine is a symbol of the Korea-U.S. alliance, and the U.S. government has donated them to our military and related personnel," said Jeong Eun-kyeong, commissioner of the KDCA.

When Biden announced the vaccine support plan at the summit, it wasn't clear which shots would be donated.

Korea consistently asked for a mRNA vaccine like Pfizer or Moderna, but the U.S. eventually decided to provide the viral vector-based Janssen vaccine.

The U.S. reportedly plans to collect unused Janssen doses from each state and send them to Korea. In mid-April, a temporary suspension was put on Janssen shots in the U.S. after reports of rare blood clots in adult women younger than 50 years old.

Although the pause was soon lifted, Janssen stocks accumulated along with an overall slowdown in inoculations. Some Janssen doses are said to have an expiration date by the end of June.

It is likely that the U.S. believed the Janssen doses could be put to good use in Korea. 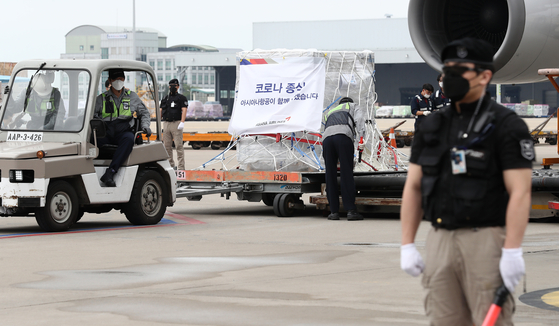 The first batch of the Moderna Covid-19 vaccine, enough for 27,500 people, arrives in Korea on Tuesday. The vaccine will be administered to health care workers under the age of 30 starting in mid-June. [YONHAP]


As of Monday midnight, 11.3 percent of Korea's population, or 5.79 million people, had received one dose of a Covid-19 vaccine, while 4.2 percent, or 2.17 million people had been fully vaccinated. 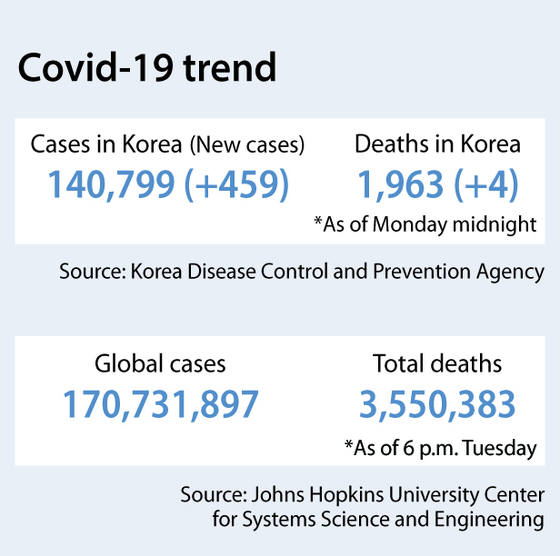 There were four additional virus deaths, raising the total to 1,963.