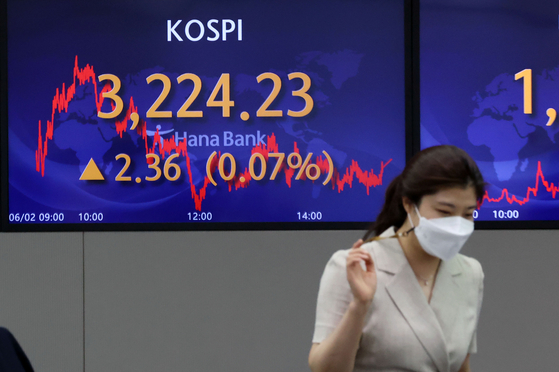 A screen in Hana Bank's trading room in central Seoul shows the Kospi closing at 3,224.23 points on Wednesday, up 2.36 points, or 0.07 percent, from the previous trading day. [YONHAP]


Stocks advanced for the fourth session in a row Wednesday, backed as strong economic data fueled expectations of an increase in corporate earnings and a quick economic rebound from the pandemic. The won fell against the dollar.

The Kospi opened slightly higher amid expectations of an increase in corporate earnings and a quick economic rebound from the pandemic.

Investors are eying the upcoming economic diagnosis from the Federal Reserve Board of Governors, set to speak Wednesday.

The local currency closed at 1,113.3 won against the dollar, up 7.4 won from the previous session's close.