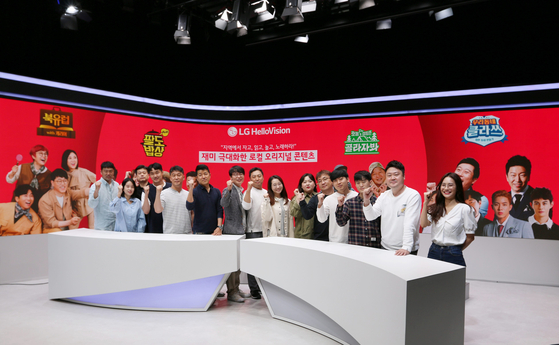 
LG HelloVision, a cable TV operator owned by mobile carrier LG U+, will spend 40 billion won ($36 million) on content to stay competitive, part of a wave of investments by major media and tech companies at home and abroad.

The spending is aimed at stopping a shrinking market share in the paid TV market, as cable TV networks lose ground to IPTV operators.

LG HelloVison said Wednesday it will double its investment in content production to 40 billion won this year. To carve out its own niche, four new television series will be produced on local community themes.

“Local-based content is a strength that cable TV operators have to compete with,” said Kang Myoung-shin, leader of the community business team at LG HelloVision.

“We will develop our own series into 'killer' content,” he said.

LG HelloVision tapped Park Hyun-woo, a former producer at CJ ENM, to oversee the company’s productions.
The announcement came as the cable network tries to compete with a wide range of producers from IPTV to streaming platforms like Netflix, Wavve and Tving.

Cable TV operators’ market share shrank to 38.26 percent at the end of last year, down 2.09 percentage points from the previous year, according to the Ministry of Science and ICT.

Companies are spending a lot of money to create their own TV series.

CJ ENM announced earlier this week that it will be investing over 5 trillion won in content production over the next five years, including 800 billion won this year alone.