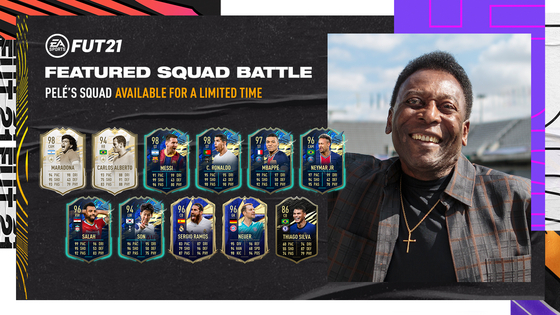 EA Sports, manufacturer of the FIFA games, on Tuesday tweeted out an image of a special squad handpicked by Pelé as part of the FIFA Ultimate Team card game available within the FIFA 21 game.


Pelé named Son to the squad alongside a lineup of footballing greats both past and present, pushing the Korean forward back to a midfield position as he tried to cram as much offensive power as possible into the team.

Pelé often collaborates with EA Sports and FIFA on games and events and has regularly named his top teams of the year, decade or even century. His team will be available within the FIFA 21 game for other players to try their luck against.

The only player that ranks higher within the game than those picked by Pelé is Pelé himself, who has a score of 99, one above Ronaldo, Messi and Maradona's 98. Son has a score of 94, but surpasses Maradona in pace, shooting and defense.

Pelé, often referred to simply as "the greatest," is considered one of the best football players ever. Active from the 1950s to 1970s, Pelé won three World Cups with Brazil and coined the phrase "The Beautiful Game." Despite retiring in the 1970s, he remains Brazil's top goal scorer, with 77 goals, and holds the record for most goals scored in top flight football, at 541 goals in 560 games, and most goals scored across all fixtures, at 1,279 goals in 1,363 games.