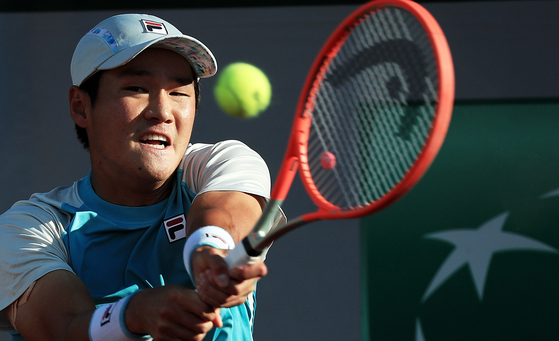 Korean tennis player Kwon Soon-woo hits a backhand during the first round match against Kevin Anderson of South Africa at the French Open tennis tournament at Roland Garros in Paris, France on Tuesday. [EPA/YONHAP]


Korean tennis player Kwon Soon-woo picked up his first win of the 2021 French Open on Tuesday.

Despite having a higher world ranking than Kwon, the 30-year-old South African had experience on his side, going into the match with 583 ATP matches under his belt to Kwon's 49. Anderson has reached a grand slam final twice, at Wimbledon in 2018 — the same year he reached No. 5 on the world ranking — and the U.S. Open in 2017.

The first set was fierce as Anderson took an early lead with the first game. Kwon caught up and the set went to a seventh game, with Kwon ultimately winning the set 7-5.

After winning the first set, Kwon led the second by just one game. With the score at 5-4, Kwon out-served Anderson to break a deuce and ultimately take the set 6-4.

The fourth went to a 6-6 tie-break, with Kwon eventually emerging victorious to win the match. 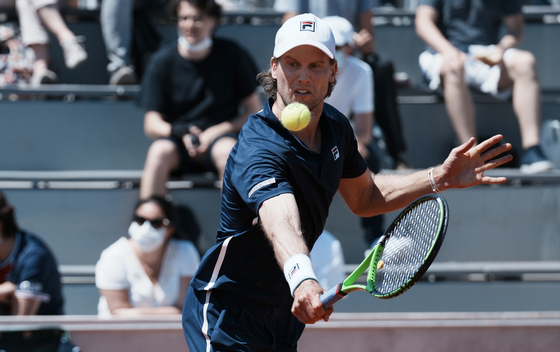 Italy's Andreas Seppi plays a return to Canada's Felix Auger-Alissime during their first round match on day three of the French Open tennis tournament at Roland Garros in Paris, France on Tuesday. [AP/YONHAP]


Kwon now advances to the second round, where he will face world No. 98 Andreas Seppi of Italy on Thursday. The two faced each other last year, at the ATP Masters 1000 Cincinnati, where Kwon defeated the Italian in straight sets: 6-4, 6-3, 6-4.