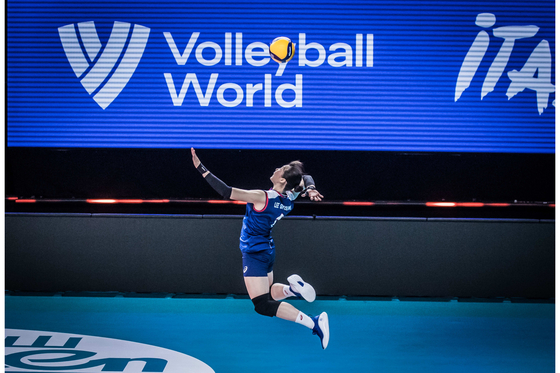 Lee So-young serves the ball to the Dominican Republic at the 2021 Women's Volleyball Nations League on Tuesday in Rimini, Italy. [VOLLEYBALL NATIONS LEAGUE]


Korea’s national volleyball team has lost two more games at the 2021 Women's Volleyball Nations League, falling to the Dominican Republic on Tuesday before putting up a five-set fight against Belgium on Wednesday before settling for yet another loss.

Korea has now lost five of six games, four of those in straight sets.


Captain Kim Yeon-koung and Libero Oh Ji-young were back for both games, after resting on Monday.

The first two sets against the Dominican Republic in Rimini, Italy, were close, as the two teams found themselves level from the first point to a 23-23 standoff. The Caribbean team eventually won the first set 25-23 and the second 28-26.

Korea couldn’t quite figure out the Dominican team even in the last set, trailing behind their opponent by two to three points. This set wasn't a close call, with Korea seemingly running out of steam to lose 25-18.

Korea put up more of a fight against Belgium.

With the European team ahead two sets to one, Korea fought back again, winning the fourth set 25-19, but couldn't keep up that momentum into the fifth and final set, which Belgium won 15-12 to take the match.

"Since the beginning of this week we have opponents who are blocking high, so it's difficult, but we have been practicing how to use this high-block, so we hope that in the last match we will use what we have worked on.” Korean setter Yeom Hye Seon told Volleyball World after the Dominican Republic match.

With five losses and one win, Korea ranked 14th out of 16 countries as of press time. Korea now has a few days to work on their approach before taking on Italy on Sunday.