Stocks rise for a fifth day as inflation concerns ease

Stocks rise for a fifth day as inflation concerns ease 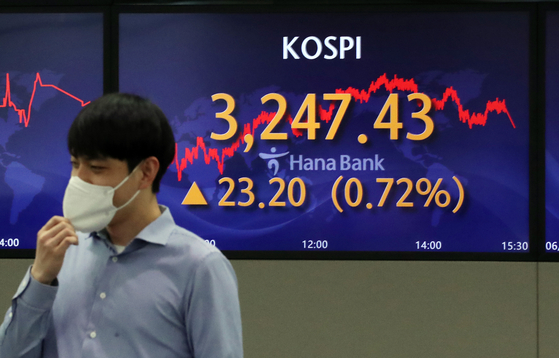 Trading volume was moderate at about 1.6 billion shares worth some 16.7 trillion won ($15 billion), with gainers outnumbering losers 425 to 402.

The Kospi advanced for the fifth session, bolstered by strong foreign and institutional buying.

Overnight, the tech-heavy Nasdaq Composite gained 0.14 percent, following the Fed's reiteration of its stance that the ongoing price rises are likely transient. The Dow Jones Industrial Average and the S&P 500 edged up 0.07 percent and 0.14 percent, respectively.

The Kospi's gain was led by tech and bio advances, while construction and insurance slumped.

Amid the Kospi's increasing valuation, local investors are eyeing the upcoming U.S. job data for May, set to be released Friday.

The local currency closed at 1,113.6 won against the dollar, up 0.3 won from the previous session's close.