2020 was a shrinking year for Korean companies

2020 was a shrinking year for Korean companies 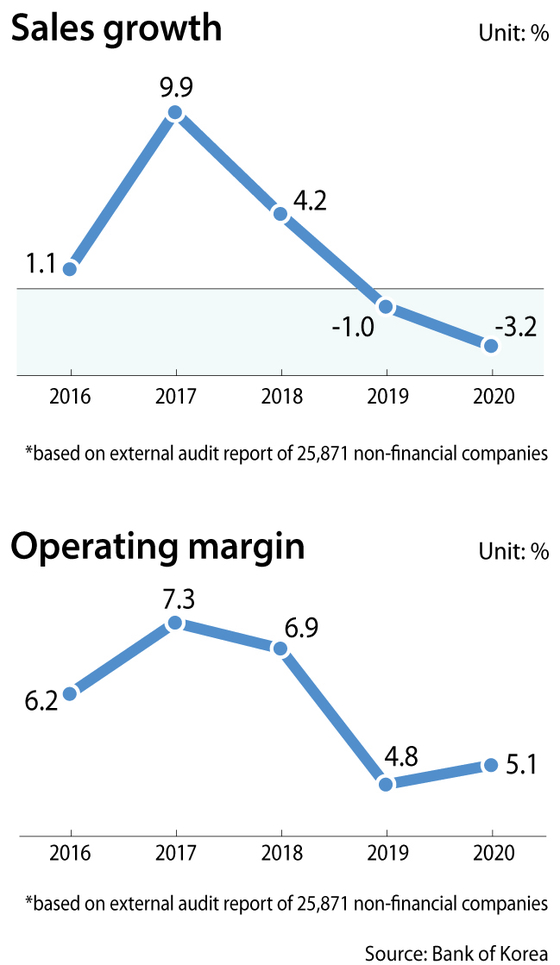 Korean companies shrunk an average of 3.2 percent last year, according to a report released by the Bank of Korea Thursday, because of the coronavirus epidemic.

The proportion of companies unable to cover interest payments on debt hit a record high.

The central bank analyzed audits filed by the country’s 25,871 non-financial companies and released a gloomy overview of the previous year.

In 2017, the same group of companies reported 9.9 percent growth in sales, which tumbled to 4.2 percent in 2018 and minus 1 percent in 2019. Last year, the average growth bottomed out at minus 3.2 percent, the worst level since the bank started accumulating data in its current form in 2013.

Sales of the biggest companies fell at a steeper rate: 4.3 percent.

The central bank said that companies in the oil refining and petrochemical businesses saw a particularly large sales plunge last year due to weak international oil prices. Revenues of oil refiners fell by 34.3 percent in 2020 and of petrochemical companies by 10.2 percent.

The proportion of companies that cannot pay interest payments on debt from operating income increased to 34.5 percent of companies analyzed last year. That figure was 31 percent in 2019.

“With the spread of Covid-19, the number of businesses in the red increased, especially in the oil refining and transport sector,” said Kim Dae-jin, head of the corporate statistics team at the central bank.

“At the same time, the profitability of some companies in the electronics and telecommunications equipment sector improved.”

Despite falls in sales, the profitability of companies slightly improved last year.

Operating margins for companies last year averaged 5.1 percent, up from 4.8 percent in 2019. Kim said that was largely due to declines in the price of inputs like commodities, including oil, last year.