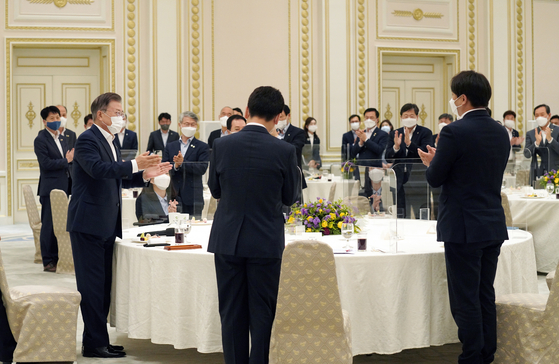 President Moon Jae-in, left, talks to the first-term lawmakers of the ruling Democratic Party at a Blue House meeting on Thursday. [YONHAP]


In their first meeting with President Moon Jae-in at the Blue House on Thursday, first-term lawmakers of the ruling party were conspicuously tight-lipped about sensitive issues, despite their past criticisms toward the administration.

Since the DP's crushing defeats in the April by-elections, the DP's first-term lawmakers have been increasingly critical of state affairs. Last month, they pressured Moon to give up at least one of three cabinet appointees accused of ethical lapses.

Speculation was high that they would offer candid suggestions to Moon at the Blue House meeting, particularly about the administration's failure to control the skyrocketing housing prices. They were also expected to address the increasing unpopularity of the party and government among voters in their 20s and 30s.

Because DP Chairman Song Young-gil issued a public apology on Wednesday for having caused disappointment over the suspected school admissions frauds committed by Moon's key ally Cho Kuk, speculation was also high that the first-termers would bring up the issue before the president. Moon was the one who had appointed Cho as senior presidential secretary for civil affairs and justice minister.

The party has remained split over Song's apology. Some lawmakers such as Rep. Kim Yong-min said the scandal is not something that the party had to apologize for, stressing that Cho already issued an apology in the past. Some party members also threatened to abandon their memberships in protest and demanded that Song step down.

Other politicians of the DP, particularly those planning to run in next year's presidential election, such as Rep. Park Yong-jin and former Prime Minister Lee Nak-yon, said they appreciate Song's decision to address the scandal and offer an apology.

"We didn't see a need to question the president about Cho," Rep. Ko Young-in, who represents the group of the first-term lawmakers, said after the Blue House visit.

Ko also said the lawmakers did not bring up the Moon administration's real estate policy or a possible pardon of the jailed Samsung leader Lee Jae-yong.

"Tax and supply issues concerning the real estate policy will soon be discussed at the special committee inside the party, and the first-term lawmakers will participate in it to actively present our opinions," Ko said. "So, we didn't talk about it with the president."

According to Ko, the first-termers asked Moon to continue expansionary fiscal policy to recover economy from the Covid-19 triggered recession. They also urged the government to pay more attention to the employment and housing issues for the younger generation and pay compensation to small business owners.

Other policy suggestions included implementation of the agreements reached at the inter-Korean summit and improvement of the working and living conditions for soldiers, Ko said.

During their 75-minute meeting with the president, the lawmakers spent 20 minutes taking photos with Moon one by one. They also received a presidential wrist watch as a souvenir of the Blue House visit.