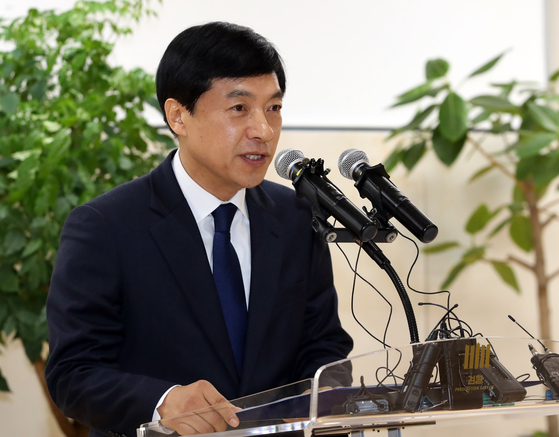 The Ministry of Justice announced a reshuffle of 41 senior prosecutors, including Lee, who has been heading the Seoul Central District Prosecutors’ Office since January 2020.

Park’s decision to promote Lee is expected to draw criticism, as Lee is accused of abuse of power. He was indicted last month on charges of obstructing an investigation in 2019 into an illegal travel ban slapped on a scandal-plagued former vice minister.

According to the Suwon District Prosecutors’ Office that indicted Lee, its Anyang Branch noticed in 2019 that the Ministry of Justice had circumvented the law to issue an overseas travel ban on the former vice minister Kim Hak-eui in order to probe allegations that he took bribes and sexual favors arranged by businessmen from 2006 to 2009.

When Anyang Branch prosecutors tried to investigate the ministry’s suspected illegal practice, key members of the Supreme Prosecutors’ Office, including Lee, pressured them to drop the case, the Suwon prosecutors said last month. Following months of probing, the Suwon prosecution indicted Lee on charges of abusing his power to obstruct the probe.

Lee Jeong-su, a key aide to Minister Park, was named as the new head of the Seoul Central District Prosecutors’ Office in succession of Lee Sung-yoon. Lee Jeong-su and Park are high school alumni.