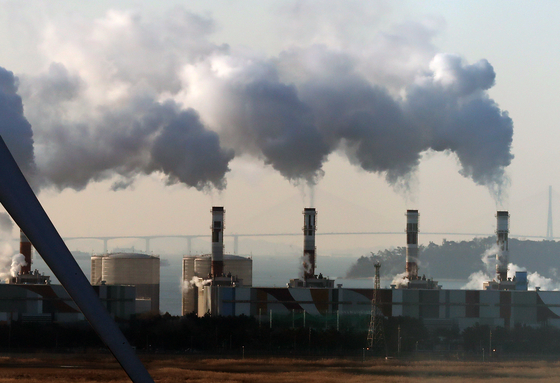 It’s been over six years since Korea adopted an emissions trading system. But the jury is still out on how effective it has been — and whether it will help Korea achieve its professed goal of net zero carbon emissions by 2050.

Carbon trading refers to a system in which the Korean government allocates emissions credit permits that allow companies to discharge specific quantities of pollutants over a given time period. If a company wants to indulge in activity that involves greater amounts of pollution, it must buy additional credits. If it pollutes less than it has been allowed, it can sell its leftover credits.

Companies can trade their emissions permits like stock. In fact, the permits are traded on the Korea Exchange. Prices fluctuate depending on supply and demand. If companies emit more than they are allowed and don't buy permits on the market, they face heavy fines.

Hu-Chems, a Kospi-listed chemical company 39.95 percent owned by Taekwang Industrial, is considered one of the big beneficiaries of the emissions trading scheme. The company has been making aggressive efforts to reduce its greenhouse gas emissions since 2004.

Hu-Chems is estimated to have earned 38.2 billion won ($34.3 million) last year selling emission permits, which comprised some 40 percent of its total operating profit in 2020, according to Daishin Securities. Its revenues in 2020 were 593.5 billion won, while net profit was 49.8 billion won.

“Hu-Chems aims to sell a total of 1.43 million tons of permits this year, 30 percent of them during the third quarter and the remaining 70 percent in the fourth quarter,” Hwang Kyu-won, an analyst at Yuanta Securities, wrote in a report.

Hu-Chems is following the lead of some well-known global companies.

Some companies are selling permits to affiliates in a bid to prevent them from spending tremendous amounts on emissions rights.

SK Energy sold about 300,000 tons of emissions permits – worth 6.66 billion won – to SK E&S last year, according to a report by the Financial Supervisory Service.

SK Energy had credits to spare. Due to the coronavirus pandemic, the operations rate of the company's plants declined to 82.6 percent from 94.1 percent.

LG Electronics has been selling its permits to LG Chem since 2017. The transaction volume between the two companies amounted to 430,000 tons, or 11.5 billion won, so far.


No notable achievements but hopeful phase 3

Korea's greenhouse gas emissions actually increased in the first four years of the trading scheme. They finally declined in 2019 — a possible indicator that the market could be helping reduce carbon emissions.

According to data by the Environment Ministry's Greenhouse Gas Inventory and Research Center of Korea, Korean companies emitted a total of 542.7 million tons of greenhouse gases in 2015, the year the system started. That amount rose to 554.3 million tons the next year, a 2.2 percent on year increase; to 571.9 million tons in 2017, up 3.2 percent; and 601.5 million tons in 2018, a 5.2 percent increase.

The numbers prove that the trading scheme did not have an immediate impact on reducing carbon emissions.

But in 2019, the amount of emissions finally dropped.

The amount of emissions by companies in 2019 declined 2.3 percent on year to 587.9 million tons. The Environment Ministry has yet to reveal the amount emitted in 2020, but it is likely to be another decline, experts predict. 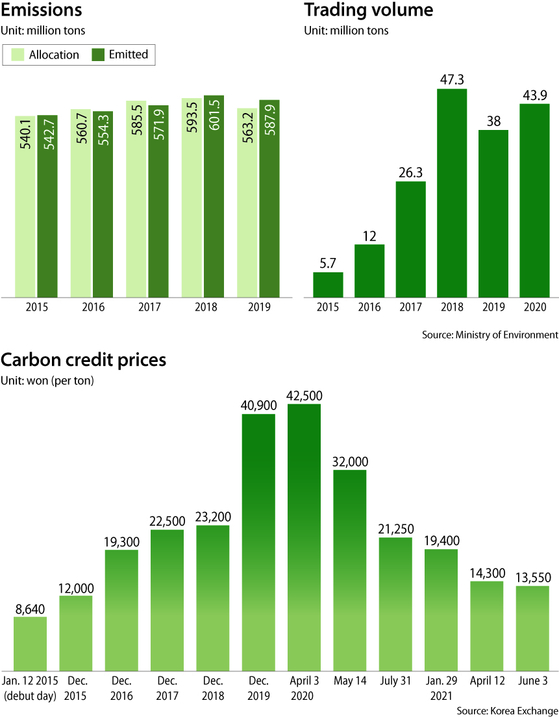 “As the numbers show, we can conclude that the scheme has been showing some achievement since 2019,” said Kim Tae-sun, CEO of NAMU EnR, a research company specializing in carbon emission permits. “It changed the way heavy polluters run their businesses.

“For instance, since the scheme started to track companies how much greenhouse gases they emit, power companies decided to run gas power plants instead of coal power stations.”

Emissions are likely to decrease further as the government closes in on polluters with tougher polices and regulations.

Since 2021, the start year of the third phase, companies are required to pay up front for the equivalent of 10 percent of their allocated emission permits. For instance, if a company is allocated permits for 100 tons of emissions, the company must pay a price equivalent to 10 tons of permits. However, if the company emits less than 90 tons, it doesn't have to pay anything — and can sell 10 tons worth of permits.

No payments were required in the first phase, and in the second the ratio was 3 percent. Heavy polluters such as steelmakers are exempt from the payments.

In the third phase, permits for a total of 2.68 billion tons of emissions were allocated to 684 companies, and of them, some 268 million tons must be paid for.

Some companies are struggling, as the amount of liabilities shows. Liabilities refer to the amount of money companies have to pay for permits if they have emitted more than they were allocated, including on the free market.

Accumulated greenhouse gas emission liabilities for Korea's top 30 companies totaled at 709.2 billion won as of the end of 2020, according to Financial Supervisory Service. That was up 7.8 percent compared to 2017.

Hyundai Steel struggled the most. Its liabilities last year were 157.1 billion won, two-times its operating profit of 73 billion won, according to the company. Kia chalked up the second largest amount of liabilities, 152 billion won, followed by Posco's 78.6 billion won.

“The system of making companies pay for permits aims to encourage them to reduce carbon emissions,” said Lee Chung-kuk, director of the Carbon Expert Group at the Korea Research Institute on Climate Change. “They have to pay to buy 10 percent of credits, but this also means that they don’t have to pay if they reduce the amount of carbon emissions.”

But prices and transaction volumes started falling in May 2020 as the coronavirus pandemic started shutting down factories.

“Carbon trading is a risky market,” CEO Kim said. “Before the coronavirus pandemic, all companies were scrambling to get their hands on more carbon emission permits. But with the pandemic , companies who don’t need permits anymore for many reasons, such as closing down plants, put those up for sale.

“High supplies resulted in a decrease in price.”

Measures to stabilize prices and encourage companies to participate in the market are urgently needed, experts say.

According to a Korea Exchange survey of 364 companies who were subject to the regulations in the first and second phases, 25.5 percent pointed out “price fluctuation” as the biggest problem of the trading scheme. A full 28.8 percent said “stability of the emission permit price” is the most urgent issue the government should solve.

“What companies want most at the moment is the stability of permit prices in the market,” said Lee from the Korea Research Institute on Climate Change. “In order to achieve that, the government should come up with some policies and reconstruct the current allocation method for carbon emission permits so that not that many of them would be released in the market, as well as prevent possible price fluctuations.”

Information asymmetry is another critical issue that needs to be tackled.


“The most urgent problem is that people who are in charge of carbon emission permits in companies don't have expertise in how the system runs,” said Lee. “Large companies understand the scheme while others have no idea. Some companies that are not capable of actively participating in the market do nothing until the last minute and sell or buy according to their situation. And this leads to price fluctuations.

“Regular training and education are urgently needed for the companies,” Lee said, “so that they can design their use of carbon emissions permits and participate in the trading, which would bring liquidity to the market.”