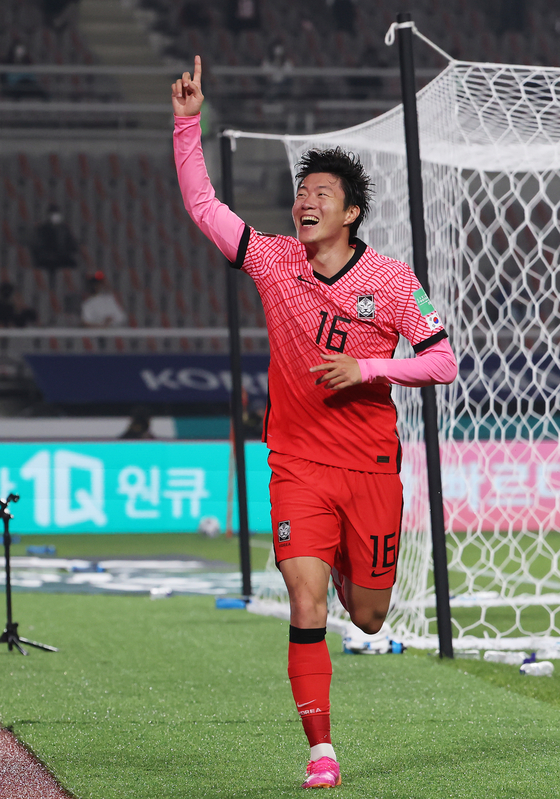 Hwang Ui-jo celebrates after scoring his second goal against Turkmenistan in a World Cup qualifier at Goyang Stadium in Goyang, Gyeonggi on Saturday. [NEWS1]


Korea cruised to a decisive 5-0 win over Turkmenistan in a qualifying match for the 2022 Qatar World Cup at Goyang Stadium in Goyang, Gyeonggi on Saturday.

The Taeguk Warriors got things started quickly under the lights on Saturday, opening the scoring after just nine minutes when a well-placed cross found Hwang Ui-jo in the box. The Bordeaux forward had no problem heading the ball home to give Korea an early 1-0 lead.

Korea dominated throughout the first half, with 70 percent of possession and 21 shots, 13 on target, to Turkmenistan’s one. Yet despite clearly outclassing their opponents, the Taeguk Warriors struggled to convert their opportunities early on.

Korea played an exceptionally aggressive game throughout the opening frame, with almost the entire squad playing well within Turkmenistan’s half. In fact, the Taeguk Warriors pushed so many people up front that on more than one occasion it fell to Kim “The Monster” Min-jae to foil the occasional Turkmenistan offensive on his own.

Yet despite this all-out approach, it wasn’t until two minutes into injury time at the end of the half that Korea was able to add an insurance goal. Nam Tae-hee picked up a deflection inside the box, slotting it past the goalkeeper to take the score to 2-0 going into half time.

Korea started the second half just as aggressively, with Hwang set loose on his own in the box twice in the first three minutes, missing both opportunities.

Head coach Paulo Bento had likely pushed the team to capitalize on their opportunities during the break, and Korea returned with far more offensive fireworks in the second half.

The Taeguk Warrior’s third goal came in the 57th minute, when Jung Woo-yeong headed the ball to the feet of defender Kim Young-gwon in the middle of a goalmouth scramble. Kim had time to stop the ball, take a second to line up a slot, and then blast it past the goalkeeper to take the score to 3-0.

Another goal followed just minutes later in the 62nd minute, when the Turkmenistan goalkeeper deflected a free kick from captain Son Heung-min to Kwon Chang-hoon, who sent the ball straight into the back of the net. 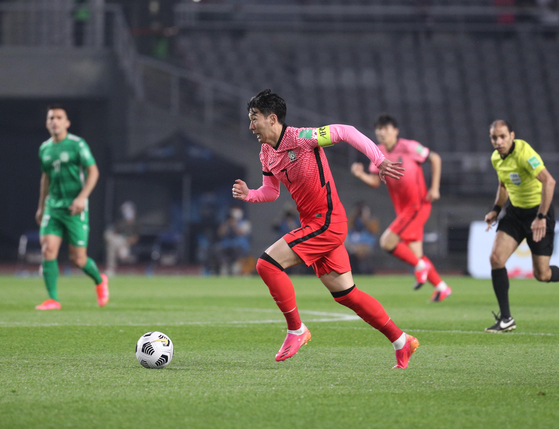 Son Heung-min runs with the ball during a match against Turkmenistan at Goyang Stadium in Goyang, Gyeonggi. [NEWS1]


While set pieces based around Son seemed to be a bit of an issue throughout the game, the free kick deflection played out perfectly to take the score to 4-0.

Korea pulled out all the stops for the fifth goal in the 73rd minute.

Kwon passed the ball to Son in midfield, who then flicked it over his head to beat a defender, moving up to the edge of the box before passing it back to Kwon. The Suwon Samsung Bluewings midfielder sent the ball across the box to Hwang, who used his left heel to flick the ball past the goalkeeper to take the score to 5-0.

The Taeguk Warriors continued their offensive for the remainder of the game but were unable to get anything else across before the final whistle blew. Despite the blow out, the two sides played a fairly cordial game, with only one yellow card each.

The win gives Korea a strong lead in Group H with two games left to play. Korea leads with 13 points, followed by Lebanon with 10, Turkmenistan with six and Sri Lanka with zero.

Topping the group will take Korea on to the third round of qualifiers, practically guaranteed after Saturday’s win, while only the four best runner-up teams will advance. Lower-ranked teams will not qualify.

Half of the Group H games were played in 2019 before the tournament was postponed due to the Covid-19 pandemic. Korea has now played one game each against Lebanon and Sri Lanka, and two games against Turkmenistan.

Korea won the first leg against Sri Lanka 8-0 on Oct. 10, 2019, with two goals from Son, four from Kim Shin-wook and one each from Hwang Hee-chan and Kwon.

The June 9 game should actually be the Sri Lankan leg of the fixture, but because of Covid-19 travel limitations, all games will be played in Korea as the central point within the group.

Korea is extremely likely to qualify for the third round of the Asian qualifiers, where 12 teams will be sorted into two groups of six, again playing round robin home and away matches. The top two teams from each group will immediately qualify for the World Cup, while the two third-placed teams will play each other for the right to compete in the inter-confederation playoffs.