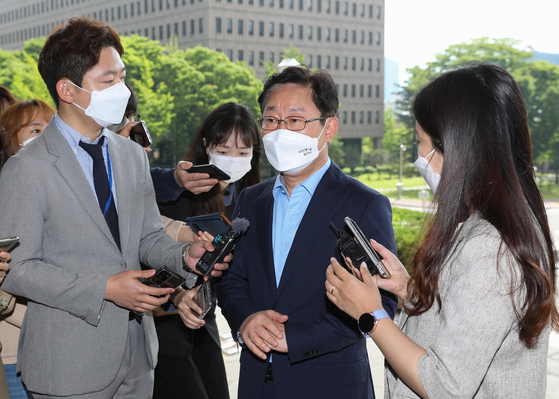 Minister of Justice Park Beom-kye answers questions from the press about his prosecutor reshuffle at the Ministry of Justice headquarters in Gwacheon, Gyeonggi, on Friday. [YONHAP]


The Korean Bar Association on Saturday protested the Justice Ministry’s decision to promote Seoul prosecution chief Lee Sung-yoon to head of the Seoul High Prosecutors’ Office, despite his pending criminal trial for alleged abuse of power to obstruct a politically sensitive investigation.

“The fact that the official in question is not dismissed, but rather has been appointed to a position that can directly or indirectly influence investigations and trials against himself [...] undermines the judicial system of fair trials and the prosecution's core value of political neutrality,” the association said.

Lee was indicted last month on charges including obstructing an investigation in 2019 into an illegal travel ban slapped on scandal-plagued former Vice Justice Minister Kim Hak-eui.

According to the Suwon District Prosecutors’ Office which indicted Lee, the Ministry of Justice circumvented the law in 2019 to issue an overseas travel ban on Kim, in order to probe allegations that he took bribes and sexual favors arranged by businessmen from 2006 to 2009.

“It is only fair for a prosecutor to be dismissed from office or for the prosecutor to step down voluntarily if he or she is investigated and indicated,” the association said. “What a disgrace it is for the people to have the sitting minister of justice, former vice minister and high-ranking prosecutors be subject to ongoing investigations.”

Kim’s case is pending at the Supreme Court. Minister Park was accused earlier in the year of physically assaulting a person who came to see him in 2016, when he was a lawmaker, to ask for a change in the law regarding the bar exam.

In addition to Lee’s promotion, Park also announced a reshuffle of 40 other senior prosecutors, which one prosecutor said was “rife with political intentions,” given some instances of promotions of figures considered pro-Moon Jae-in.

Kim was previously involved in a case concerning the military service of former Justice Minister Choo Mi-ae’s son. Kim and other prosecutors cleared Choo of allegations that she had abused her power to arrange special treatment for her son while he was serving in the military in 2017, and also cleared the son of all charges. Choo, former head of the ruling Democratic Party (DP), is close to the Moon Jae-in administration.

The new head of the Suwon District Prosecutors’ Office will be Shin Seong-sik, a former high-ranking prosecutor in charge of anti-corruption investigations at the Supreme Prosecutors' Office. Shin was reported to be the first person to accuse Han Dong-hoon, a senior prosecutor and close ally of former Prosecutor General Yoon Seok-youl, of allegedly conspiring with a reporter to blackmail an executive.

Yoon resigned in March after butting heads with the Moon administration and the DP.

A team of prosecutors at the Seoul Central District Prosecutors’ Office, which took up the case on Han, has reportedly submitted their decision to clear Han of all charges, but Lee has allegedly refused to approve the decision.

In the recent reshuffle, Han was assigned to a position at the Judicial Research and Training Institute, usually considered a demotion for a high-level prosecutor.

By filling chief prosecutorial positions in Suwon with so-called “pro-Moon figures,” the Ministry of Justice may be looking to “stop further indictments against pro-Moon figures in the government embroiled in the Kim Hak-eui case,” a prosecutor told the JoongAng Ilbo over the weekend.

Other chief prosecutors considered to be close to Yoon were effectively demoted, including Cho Nam-kwan, acting prosecutor general, who was appointed as the next head of the Institute of Justice, and Gwangju High Prosecutors’ Office chief Koo Bon-sun, who has been assigned as a researcher at the institute. Koo was the deputy prosecutor general during Yoon’s tenure. 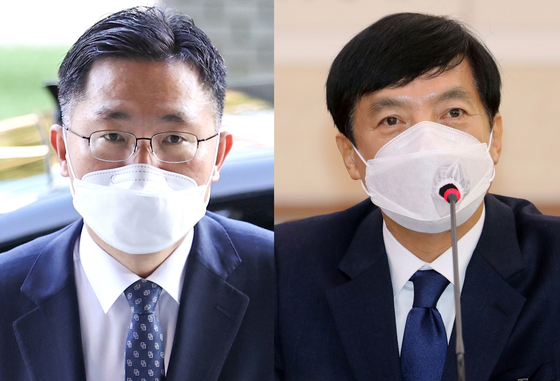 
On the other hand, Lee Jeong-su, a key aide to Minister Park, was named the new head of the Seoul Central District Prosecutors’ Office. Lee Jeong-su and Park are high school alumni.

When questioned about the reshuffle decisions on Friday, Park told the press that he thinks the reshuffle “will provide a good mix of reform and stability in the prosecution,” adding that he “cannot comment on the matter on a person-by-person basis.”