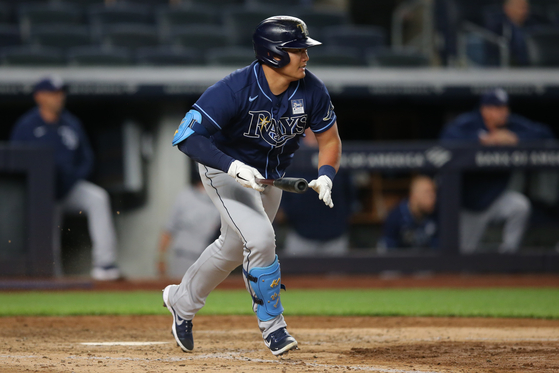 
Choi Ji-man of the Tampa Bay Rays and Kim Kwang-hyun of the St. Louis Cardinals have both been added to the 10-day injured list (IL), leaving just three Korean players active in the major leagues.

Choi was placed on the 10-day IL on Friday, backdated to Thursday, after straining his groin during a game against the New York Yankees on Tuesday. He appeared as pinch hitter on Wednesday, further aggravating the injury.

Choi has only appeared in 15 games so far this year after starting the season on the IL after undergoing knee surgery during spring training. He's been explosive at the plate since rejoining the Rays on May 16, with 14 hits, eight runs, 11 RBIs and two home runs for a .304 batting average and a .522 slugging percentage.

The Korean slugger doesn't seem too concerned about the injury, according to reports, saying he expects to return to the starting lineup soon.

Kim started for the Cardinals on Friday against the Cincinnati Reds, but took himself out of the game after three innings due to lower back tightness. Kim also started the season on the IL for the same reason. 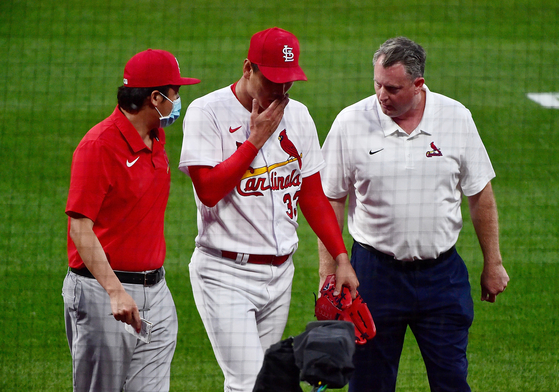 St. Louis Cardinals starting pitcher Kim Kwang-hyun walks off the field with a trainer prior to the start of the fourth inning against the Cincinnati Reds at Busch Stadium on Friday. [USA TODAY/YONHAP]


Kim threw three full innings against the Reds, giving up three earned runs with two homers for his fourth consecutive loss. He returned to the mound at the start of the fourth inning, but threw one warm-up pitch before exiting the game. The Cardinals added Kim to the 10-day IL on Saturday.

Speaking after the game, Cardinals manager Mike Shildt said that Kim had "jarred" his back as he hit the bag while covering first base in the third inning. According to Shildt, the Korean southpaw isn't expected to need more than 10 days on the IL.

With Kim and Choi temporarily out, that leaves Ryu Hun-jin of the Toronto Blue Jays, Kim Ha-seong of the San Diego Padres and Yang Hyeon-jong of the Texas Rangers to fly the flag for Korea in the big leagues.

The two pitchers have also run into some trouble recently — Ryu picked up a loss in an unusually difficult game on Friday, while Yang has been moved back to the Rangers' bullpen after a brief stint as a starter.