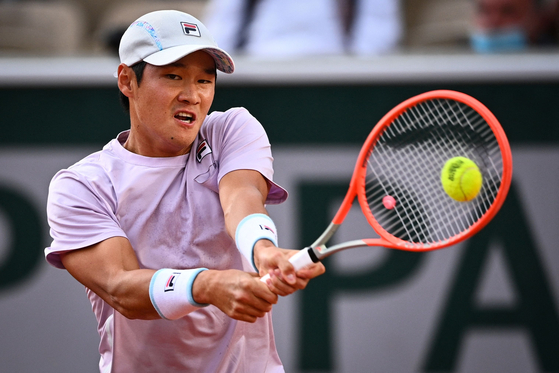 Kwon Soon-woo returns the ball to Italy's Matteo Berrettini during their men's singles third round tennis match on Day 7 of The Roland Garros 2021 French Open tennis tournament in Paris on Saturday. [AFP/YONHAP]


Korean tennis player Kwon Soon-woo lost in straight sets against No. 9 Matteo Berrettini of Italy in the third round of the French Open on Saturday.

The first set was fierce as Kwon took an early lead with the first game. Berrettini and Kwon each fought to defend their own serves, as Kwon managed to hold his own at 5-5 after three deuces. Finding themselves at a tie-break, the first set went to a seventh game, with the Italian ultimately taking the set 7-6.

Kwon struggled to figure out the world No. 9 in the second set, conceding his serve for the first time at 3-4 which ultimately led to a 6-3 loss.

In the third set, Kwon tried hard to keep up with Berrettini as the Italian started off the game leading by two.

Kwon played well, but Berrettini demonstrated the importance of serves, as Berrettini had 20 aces to Kwon's one.

At double match point, Berrettini out-served Kwon to finish 6-4 and advances to the Round of 16 to face Roger Federer.

Berrettini holds four ATP Tour titles and advanced to a Grand Slam semi-final at the U.S. Open in 2019. This is his first time making it past the third round at the notoriously gruelling French Open.

This was the first time Kwon has advanced to the third round of a Grand Slam, dropping out of the U.S. Open in the second round last year. Only two Koreans, Chung Hyeon and Lee Hyung-taik, have reached the third round in Paris, and neither made it any further.

To reach the third round, Kwon beat World No. 98 Andres Seppi of Italy in straight sets on Thursday.

Despite losing against Berrettini, Kwon's win against Seppi on Thursday bumped up his world ranking from No. 91 to No. 79, which could give the 23-year-old a shot at Olympic glory.

The cut-off date for the Olympic tennis event comes after the French Open, when the 56 top-seeded players automatically qualify for the men's single event.

Each country can only earn four berths, meaning countries like the United States, France, Spain and Italy that have more than four top-ranked players can only send four to Tokyo.

Considering that some players are dropping out of the Olympics voluntarily, Kwon has a chance of falling within the 56 and competing on the big stage. If he does, he will be the first Korean tennis player to participate in the Games since Lee Hyung-taek at the 2008 Beijing Olympics.