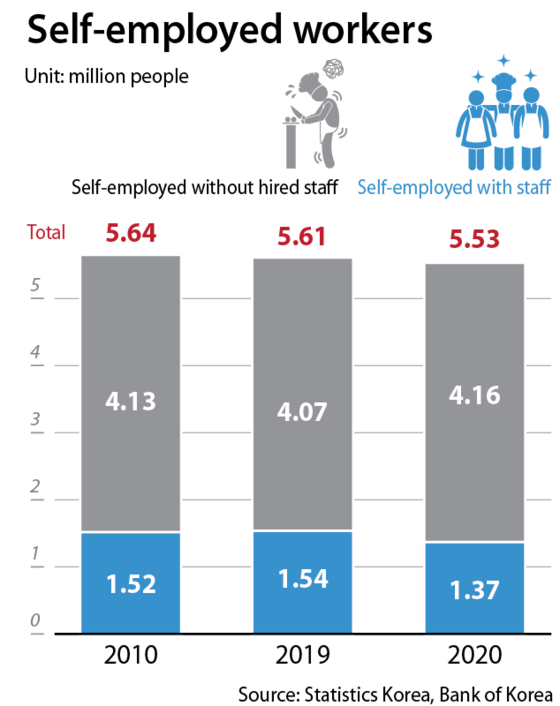 
The impact of the coronavirus pandemic on the self-employed is becoming clearer.

According to a report released by a team of researchers from the Bank of Korea on Monday, the number of self-employed people in Korea last year decreased by 1.4 percent to 5.53 million.

The decline was steepest in businesses that required face-to-face interactions with customers, which accounted for some 48 percent of all self-employed jobs as of 2020. Social distancing measures imposed to curtail the spread of the virus hurt those businesses.

"Declines in the lodging and restaurant sector seem small compared to other sectors but we think that it's largely due to the relatively high cost of entering the business, which keeps the self-employed in those businesses from closing down quickly," said Oh Sam-il, a senior economist on the central bank's labor market research team. "The impact of Covid-19 could show at a slower pace for those in the lodging and restaurant businesses, but that would also mean a slow recovery."

There was one industry that saw a significant increase in the number of self-employed last year: transportation and storage.

The number of self-employed in the transportation and storage industry increased by 6.7 percent to 640,000 last year thanks to increases in deliveries of food and goods.

The central bank team said the impact of Covid-19 was particularly tough on self-employed people hiring full- or part-time workers.

Last year, the number of self-employed people with hired workforces plunged by 11 percent from 1.54 million to 1.37 million.

According to Oh, the nature of self-employed businesses changes when staff are involved.

"Those with staff usually operate larger-scale businesses with much larger sales and also fixed costs including rents and labor costs," Oh said. "Businesses with large fixed costs are severely affected by economic uncertainties like the pandemic."

Oh said that during the 1997 Asian financial crisis, there was a similar trend of many self-employed people with large staffs going out of business.

The number of self-employed without any hired staff actually increased in the past year by 2.2 percent to 4.16 million.

The increase was largely due to an increase in the number of self-employed couriers.

Deliveries took off during the pandemic as people stayed home and avoided crowded shopping malls and restaurants. Under social distancing measures, people in Seoul still aren't allowed to dine at restaurants past 10 p.m.

Most delivery workers are considered "gig workers" and categorized as self-employed, the report said.

"We expect these self-employed people who work alone to continue to increase as [online shopping and food delivery] platforms thrive," Oh said. "However, it's important to take note that there are a lot of people who became self-employed workers involuntarily due to the economic downturn and job security is not guaranteed for them."