Test kit makers wow the world and profit in the process

Test kit makers wow the world and profit in the process 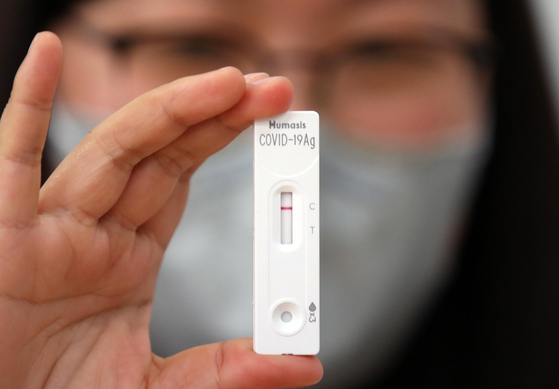 A staff from Humasis holds up an antigen Covid-19 test kit durings instruction to teach call center workers in Seongdong District, eastern Seoul, on how to use the kit on May 17. [YONHAP]

For years, the market of in vitro diagnostics — which refers to testing blood or tissue samples taken from the human body — was dominated by multinational firms, with Roche, Abbott, Danaher and Siemens in the lead with a combined market share above 50 percent.

The coronavirus pandemic offered an unexpected boost for smaller Korean test-kit makers, getting their names into the global market and allowing them to gain some ground on the global bio leaders.

Korea was hit early by the pandemic, and demand for test kits quickly soared. The government quickly approved the test kits, which began to be exported to the West in March 2020.

Last year, Korea exported $2.17 billion of medical test kits, almost a tenfold growth from 2019. A total of 236 Covid-19 test kits were granted export approval by the Ministry of Food and Drug Safety during the same period. They were delivered to more than 170 countries.

Trade statistics show that global demand for the products this year remains strong despite concern that the winding down of the pandemic would lead to a fall in orders.


Vaccination did not lead to dramatic fall

By weight, monthly exports of Covid-19 test kits this year have remained at between 450 tons and 600 tons, similar to last year apart from November and December, when monthly exports were especially strong. By dollar amount, the total is down due to heavy competition.

Peru imported $8.8 million worth of Korean test kits in the first quarter, while from China it imported $1.5 million.

"In the early days of the pandemic, China-made test kits took up a large proportion until there was a big controversy regarding their accuracy," said Kim Min-seong, who works at Korea Trade-Investment Promotion Agency's (Kotra) Peru office.

"Korean products rose to first place in the fourth quarter of last year. Their market share in the first quarter was 64 percent. It seems unlikely that the coronavirus pandemic will end in Peru in 2021, so this trend will probably continue on this year."

Russia bought $8.14 million of Korean test kits last year. According to an April report from the Kotra, Russians prefer them over imports from China, which are cheaper but considered to be less accurate.

In particular, the momentum benefited small-sized bio companies that were losing money developing these products before the pandemic.

Bioneer is one of the few companies in the world that mass produces both test kits and equipment for analysis. Usually, companies specialize in one of the two and source the other from an external supplier.

"We currently export to more than 90 countries in the world, but our main destinations are Middle East countries like Qatar, Saudi Arabia or developing economies like those in Eastern Europe, South America or Africa where infrastructure for PCR testing is not mature," the company said in a statement.

"PCR equipment takes massive investments over the long term to obtain the technology."

Bioneer's market share in Saudi Arabia is about 70 percent, while its share in Qatar is around 60 percent.

MiCo BioMed has been increasing its presence in Senegal in partnership with the regional office of Institut Pasteur, a non-profit dedicated to biology and microorganism studies. Together, they built 12 Covid-19 testing centers in Senegal using MiCo BioMed's equipment. India is the largest test kit market for LabGenomic, where it sends half its products. In May, Seegene signed a $4.8 million contract to exclusively supply Covid-19 test kits to Kuwait's Ministry of Health for five months.

Test kit makers today face a different business environment from last year: Mutations of the pandemic virus are coming up, and vaccination programs have started in many countries. In line with that change, companies are diversifying portfolios.

In the early months of the pandemic, PCR testing was in the highest demand. The test was simpler too, as products only had to detect one strain of the coronavirus.

In April, Seegene received an export approval for two new Covid-19 test kits: one that can detect five mutations of the coronavirus and another that can specify which variation the patient has caught within two hours. According to the company, analyzing whether a patient is infected by a coronavirus mutation would normally take a full day, including DNA analysis.

Companies have also been developing test kits that can produce results in a shorter amount of time, with easier methods, like using saliva. 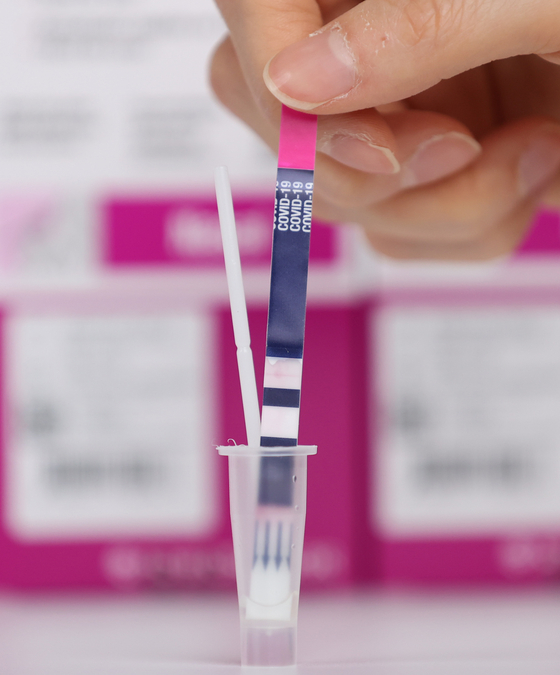 Antigen tests, for example, detect viruses from the throat or nose to see whether the person is infected with the virus. Compared to PCR tests, they are less accurate but can produce results in a shorter period of time and at home instead of going to a doctor.

Humasis and SD Biosensor, both of which were approved for domestic sales of antigen Covid-19 tests in April, were selling them in more than five overseas markets before they received the nod from Korean regulators.

Demand for antibody Covid-19 tests is on the rise as well. Antibodies are formed after a body has overcame a virus or after vaccination.

"The Covid-19 pandemic was a good event for local test kit companies to publicize their names and accumulate experience," he said.

"Some companies that did well last year are currently considering mergers with smaller players. We may even see ventures merging with each other to boost size. This is something we never saw before the coronavirus, and I think it could fundamentally upgrade our diagnostics market in the future."