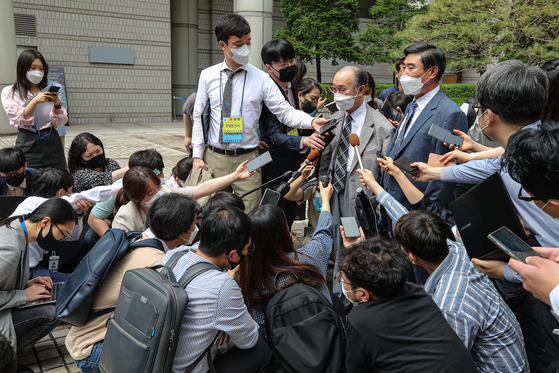 Lim Chul-ho, center, the son of a deceased forced laborer, speaks to reporters Monday afternoon about plans to appeal after the Seoul Central District Court dismissed a lawsuit by 85 Korean victims of wartime forced labor and their families against 16 Japanese companies, the largest of its kind. [YONHAP]


A Seoul district court Monday dismissed a lawsuit by 85 Korean victims of wartime forced labor and their families against 16 Japanese companies, claiming the plaintiffs don’t have the legal right to seek damages.

The Seoul Central District Court rejected the collective suit seeking compensation, the largest of its kind, despite a completely opposite ruling by Korea's Supreme Court in 2018 siding with forced labor victims.

The forced labor victims and their families first filed the civil lawsuit against Japanese companies that conscripted workers during World War II, including Nippon Steel, Nissan Chemical and Mitsubishi Heavy, in 2015. They demanded 100 million won ($89,860) in compensation for each individual.

A dismissal is a decision made without a trial if litigation requirements are not met and can be considered tantamount to a ruling against the plaintiffs.

The court said that while the rights to individual claims by Koreans against Japan or Japanese nationals cannot be considered to have been extinguished under the 1965 Korea-Japan claims agreement, “the exercise of such rights through lawsuits is limited."

The court said that individuals’ rights to compensation were covered by the Korea-Japan treaty normalizing bilateral relations, taking into consideration the terms and conditions of the claims agreement, related documents, the circumstances and intentions of the related parties at the time of its conclusion and their follow-up measures.

The court acknowledged that the claims may violate international legal principles that countries cannot use domestic law as justification for failing to abide by treaties.

It said that accepting plaintiffs’ claims could be in violation of Article 27 of the Vienna Convention on the Law of Treaties, which states, “A party may not invoke the provisions of its internal law as justification for its failure to perform a treaty.”

This lawsuit was the largest among a series of similar lawsuits filed by Korean wartime forced labor victims.

The Korean Supreme Court made a landmark ruling on Oct. 30, 2018, ordering Nippon Steel & Sumitomo Metal, renamed Nippon Steel, to pay 100 million won each to Korean victims of Japanese forced labor during World War II. It made a similar ruling on Nov. 29, 2018, against Mitsubishi Heavy Industries. The top court acknowledged the illegality of Japan’s 1910-45 colonial rule of Korea and recognized that the individual’s right to compensation had not expired.

Tokyo maintains that all compensation issues related to Japan’s 1910-45 colonial rule over Korea were “completely and finally” resolved through a 1965 treaty normalizing bilateral relations and has vehemently protested the forced labor rulings. It has especially been concerned about the liquidation of Japanese companies’ assets in Korea.

The two countries have faced deteriorated bilateral relations since, and Japan’s export restrictions on Korea from July 2019 are seen as retaliation for the forced labor decisions. The two sides are also squabbling over the issue of Japan’s wartime sexual slavery.

In the case dismissed Monday, the first hearing was held on May 28, six years after the first filing.

The court initially scheduled a hearing for Thursday but notified the plaintiffs and defendants at the last minute that it was rescheduled for Monday morning.

The victims said they plan to appeal.

Lim Chul-ho, 85, the son of a deceased forced laborer, called the court’s decision “pathetic” and “deplorable to the point that I am at a loss for words.”

He added, “Your own country and people should not put you to such shame."

Kang Gil, an attorney representing the forced labor victims, told reporters, “The decision is very unfair and runs opposite of the precedent set by the Supreme Court.”

He added, “The victims were forcibly conscripted and were in an unfair situation where they were not paid wages, so they should be compensated at least their minimum wages, and Korea-Japan relations need to be reestablished under such premises.”

The Japanese government made an official statement on the news ruling.

He added, “We are watching the Korean government’s concrete proposals for resolving pending issues.”

Similarly, a Seoul court in April dismissed a suit by Korean victims of Japanese wartime sexual slavery and their relatives seeking compensation from Japan’s government, citing diplomatic considerations and principles of international law that grant countries immunity from the jurisdiction of foreign courts.