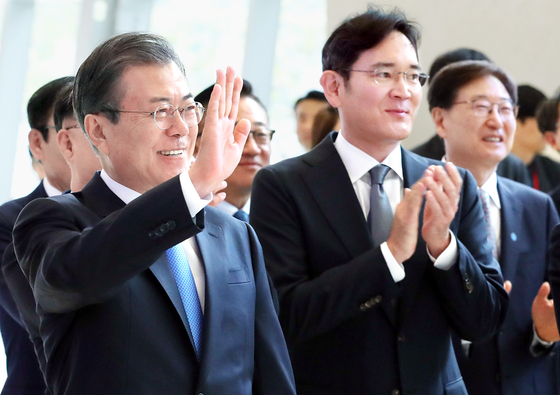 
Top members of the administration and ruling party are hinting that Samsung’s jailed leader, Lee Jae-yong, could be freed on parole.

Chairman Song Young-gil of the ruling Democratic Party (DP) floated the idea that the Moon Jae-in administration might release Lee on parole rather than a presidential pardon. “A pardon is not the only way. He can be released on parole,” Song said Sunday in an interview with Yonhap News Agency.

“What’s important is that Lee is in prison and unable to perform business activities,” Song said. “Investments are possible when Lee is out of jail.”

Samsung Electronics Vice Chairman Lee is in jail for bribing former President Park Geun-hye during her presidency through her friend Choi Soon-sil. He has about 13 months left in a sentence of two and a half years. 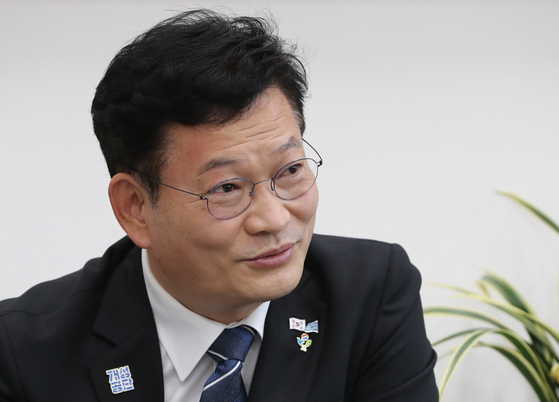 Chairman Song Young-gil of the Democratic Party talks about the possibility of Samsung's Lee Jae-yong's parole during an interview with Yonhap News Agency on Sunday. [YONHAP]

Song said public sentiment is in favor of Lee being released to help the country recover from the pandemic through leadership of industries like semiconductors and vaccines. “To my knowledge, the Blue House is seriously considering this issue,” Song said. “And I understand the Blue House’s position.”


After Song floated the idea, Justice Minister Park Beom-kye, who is in charge of the country’s parole system, replied positively. “His remarks are meaningful,” Park said on Monday. 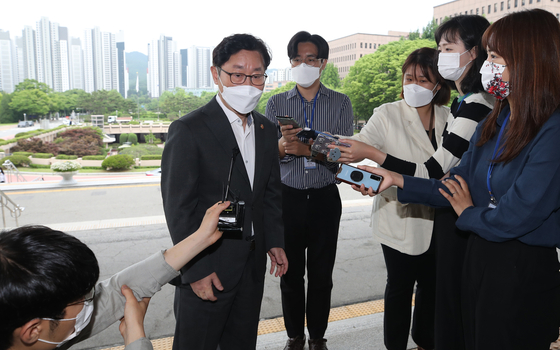 Park has long promoted the idea that more paroles should be granted in order to reduce recidivism. He approved a major change in the Ministry of Justice’s internal regulation last month allowing prisoners who serve about 60 percent of their prison terms to become eligible for parole.

Although the law says that a prisoner is eligible for parole after completing one third of his or her prison term, the ministry has operated on an internal regulation that prisoners should serve more than 80 percent of their terms before parole.

There is a tradition that presidential pardons and paroles are granted on important political anniversaries such as Aug. 15, Liberation Day. By August, Lee will complete 60 percent of his prison term.

Park, however, refused to talk about Lee. “As the minister of justice, it is wrong for me to talk about a specific prisoner’s parole,” Park said. “As President Moon has said, public opinion matters.”

Park’s latest position is a departure from past remarks. At a National Assembly hearing on April 19, Rep. Kwak Sang-do of the opposition People Power Party asked him about the possibility of Lee being pardoned or paroled. “Unless the president makes a special order, I cannot review any possibility,” Park said at the time. “I have never reviewed it and I have no plan to recommend it [to the president].”

If Lee is released on parole, he would get out of jail but still be barred from returning to running Samsung. Under the law governing special economic crimes, the Ministry of Justice imposed a five-year employment restriction on Lee in February.

Article 14 of the Act on the Aggravated Punishment of Specific Economic Crimes bars those convicted of embezzlement or breach of trust involving more than 500 million won from getting a job at companies closely related to the criminal activities. Under that law, Lee won’t be able to return to Samsung management until the second half of 2027 if he is paroled.

Park, however, has the power to lift the restriction.

Moon has seemed more receptive to the idea of freeing Lee from jail recently. In a luncheon with top executives of the country’s four largest conglomerates last Wednesday, Moon received yet another request from the tycoons to pardon Lee.

“The president said many people agree with their request,” a presidential aide said after the meeting. “Moon also said the current economic situation is unfolding differently from the past, and he understands very well that a company is required to make bold investment decisions.”

Some civic groups are already objecting to the notion of Moon freeing Lee. “Moon must keep his pledge to the people that he will show no tolerance toward a tycoon’s financial crimes and that he will limit his use of presidential power to issue pardons,” the Citizens' Coalition for Economic Justice said Monday in a statement. “Moon must publicly promise that Lee won’t be pardoned or paroled during his presidency.”