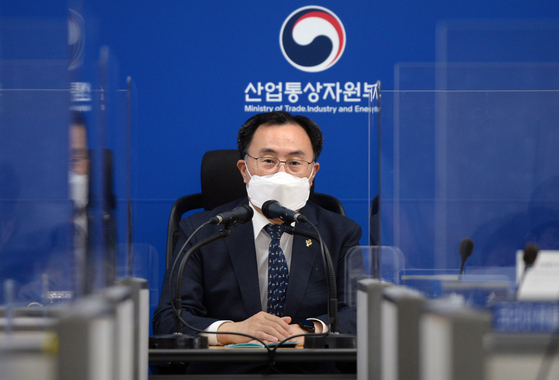 Minister of Trade, Industry and Energy Moon Sung-wook talks with the press on Tuessday at the government complex in Sejong. [YONHAP]


Trade, Industry and Energy Minister Moon Sung-wook said the government's position on new nuclear plants has not changed -- but a comprehensive review is necessary.

Moon said that even after the number of Korea's nuclear plants shrinks, the country will still be able to achieve its carbon neutrality goals by 2050.

“As the two Shin Hanul nuclear power plants are near completion, the total number of plants that will be operated will soon increase to 26,” Moon said on Tuesday during a meeting with the press.

“Considering the size of our country and its people, even from a global perspective it’s not a small number,” the minister added. “Even if 11 of those plants are reduced by 2050, [nuclear energy] will still contribute substantially and play a role in carbon neutrality.”

Moon added that the government is working on next generation nuclear technologies including small modular reactors (SMR).

He said the ministry is working with the Ministry of Science and ICT on a preliminary feasibility study for the third generation i-SMR  research and development by this fall.

“There should be continuous work on securing technologies that would resolve problems including used nuclear fuel,” Moon said.

He also addressed such issues as shortages of automotive semiconductors, which he described as a problem that would not be solved soon.

“The operating situation of the automotive industry in June has improved compared to April and May,” Moon said. “However, I can’t be sure that supplies [of automotive semiconductors] will improve in the second half.”

The minister said semiconductors for automobiles are customized for each automaker and that's a lengthy process.

The minister said the government will announce an industrial strategy on batteries next month focused on diversifying the supply network of key components.

It has been more than a month since Moon took his post on May 5. He is the third trade minister for the Moon Jae-in administration.