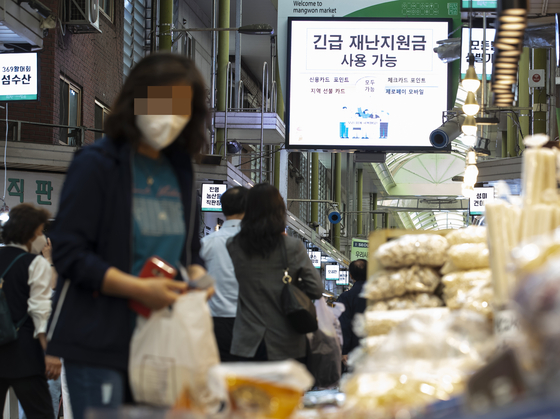 A board at the Mangwon traditional market in May 2020 advertises that stores accept emergency relief grants. The Democratic Party is pushing to include a similar grant for every Korean household in the second supplementary budget this year. [YONHAP]


Tax collections in the first four months of 2021 were up 32.5 percent on year, giving the government the wiggle room to pass a supplementary budget without selling more debt.

According to the Ministry of Economy and Finance on Tuesday, the government collected 133.4 trillion won ($119 billion) in the January to April period, a 32.7 trillion won on-year jump.

When collections related to social security and other welfare programs are included, the total came in at 217.7 trillion won, up 51.3 trillion won.

The Finance Ministry said the rapid economic recovery was a major factor in the strong tax revenue, which will help in funding the supplementary budget suggested by President Moon Jae-in again on Tuesday.

Of the 32.7-trillion-won increase, 8.8 trillion won is from income taxes deferred because of the pandemic.
Taxes in all categories were up.

The government collected 40.8 trillion won in income and capital gains taxes in the first four months, up 7.9 trillion won on year.

During a cabinet meeting Tuesday, President Moon urged the government to quickly work on the supplementary budget using the increased taxes, which exceeded expectations.

The government “should focus all of its efforts on the recovery of an inclusive economy, in which every person can feel its effects,” Moon said.

The president celebrated year-on-year export growth exceeding 40 percent for two consecutive months, which is a first, and the increased orders for ships.

“The economic recovery is gaining momentum, including the domestic economy and spending,” Moon said. “Yet there are still shadows, which fail to escape the lasting stagnation caused by Covid-19.”

He especially noted the widening gap between companies that have enjoyed success during the Covid-19 pandemic and face-to-face service businesses still struggling, and the boom in luxury goods sales and neighborhood shops facing hardship.

“While the job situation is improving rapidly, young people and women continue to struggle,” Moon said.

The president said all of these issues should be addressed with the help of an extra budget.

The Democratic Party (DP) since late last month has been demanding that the government create another supplementary budget to boost the economy.

While the size of the extra budget has yet to be determined, it has been reported by the local media that the DP is proposing a budget between 20 and 30 trillion won and a support payment to each and every Korean.

In May last year, a 14.3-trillion-won extra budget was passed to fund 85 percent of a 1-million-won-per-household payment, with the rest covered by local governments.

Because spending exceeded revenue, the deficit remained, which totaled 16.3 trillion won in the first four months of the year.

The government stressed that the deficit is smaller than it was in the same period in 2020, when it totaled 43.3 trillion won.

The Finance Minister stressed that government spending has increased to support people that continue to be affected by Covid-19 and to support new industries.

According to Statistics Korea, income provided through government subsidies for average households in the first quarter increased 27.9 percent.