Kospi falls from its peak after choppy trading

Kospi falls from its peak after choppy trading 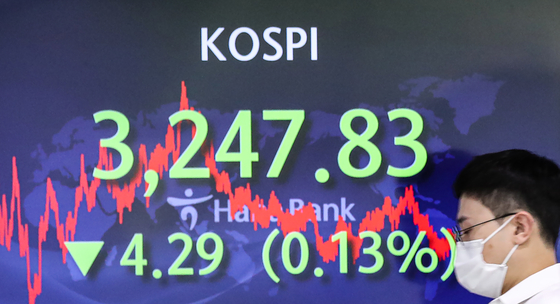 A screen in Hana Bank's trading room in central Seoul shows the Kospi closing at 3.247.83 points on Tuesday, down 4.29 points, or 0.13 percent, from the previous trading day. [YONHAP]


Stocks closed Tuesday after choppy trading, as increased valuation pressure offset hopes of a fast economic recovery. The won fell against the dollar.

The Kospi got off to a muted start after it finished the previous session at a record high of 3,252.12 points.

Stock prices fluctuated as investors took up a wait-and-see stance, seeking more clues to fathom the outlook for inflation in the United States.

The Kospi rebounded in the late afternoon as bio advanced on the progress of the vaccination campaign. But valuation pressure and lingering inflation worries erased the gains toward the session's close.

"The Kospi fell on investors' move to lock in profit and hold their cash until they have more clues about the price pressure," Daeshin Securities analyst Lee Kyung-min said.

"The upcoming [U.S.] consumer price index [CPI] for May may have a short-term impact on the local stock prices," he said.

The American CPI report is set to be released Thursday.

The local currency closed at 1,114.2 won against the dollar, up 1.3 won from the previous session's close.