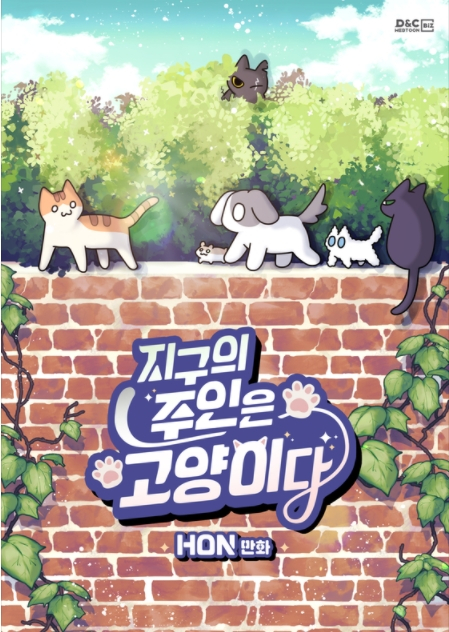 
Have you ever wondered what the cute, cuddly, yet conceited and cavalier cats on the streets are thinking, as they stare as you pass by? Well, in “Cats Rule the World,” you’ll get an insight into the world of felines, but one that might surprise you.

“Cats Rule the World” is a Kakao Page webtoon series by HON that began in March last year and recently wrapped up on May 18. It stars a stray cat called Qiqi whose master plan is to kill all humans and take over the world. She is joined by a mysterious hamster Casik and a friendly dog Morang who is also a stray. Together, they conspire to bring chaos and despair to humans and carry out their evil plans — most of which go in the exact opposite way as they had planned, instead bringing joy to their victims.

“I still feel a little dazed and feel like I’m working on the episodes. But I'm proud to have finished something!” HON told the Korea JoongAng Daily in an email interview held earlier this month after the series finished.

The very first episode of the Kakao Page webtoon series ″Cats Rule the World″ by HON shows Qiqi telling a human that she will kill her and take over the world, but the human doesn't understand the message. [HON 2020/D&C WEBTOON BIZ]


The very first scene of the first episode of “Cats Rule” is actually famous in Korea, but not because of the webtoon. In the episode, Qiqi encounters a human who pets her and says, “A cat. So cute.” When Qiqi cries meow, the human wonders whether she’s asking for food. But in reality, Qiqi is saying, “I will kill you and take over the world.”

Before officially signing with Kakao Page, HON started the series on Twitter and had planned to crowdfund in order to publish a book. But the super cute illustration and unexpected lines from Qiqi was copied and went viral, leaving HON feeling like he'd lost control of the series. Many netizens are familiar with the scene and believe it to be from a Japanese internet site because of the illustration style.

“My works have been illegally copied before in the past, so I just told myself ‘Here we go again,’” HON said. “Whenever that happens, I just decide to throw it [the series] away. It was the same with this one [‘Cats Rule the World’], I was just going to pretend like I never started it. What kept me going was [the webtoon production company] DNC Webtoon Biz. They told me that the whole copying incident meant that people loved it so much and gave me the courage to make a series. And personally, I felt that it would be easier to protect my work with DNC Webtoon Biz. They reassured me.” 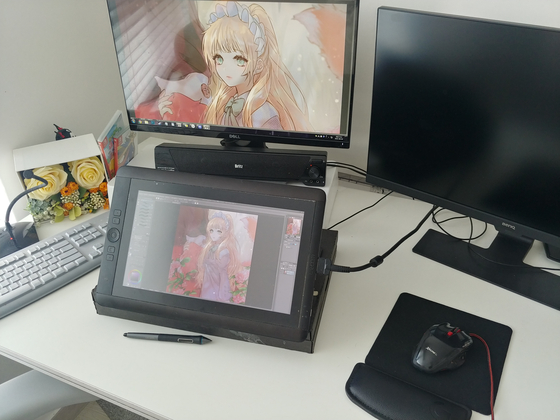 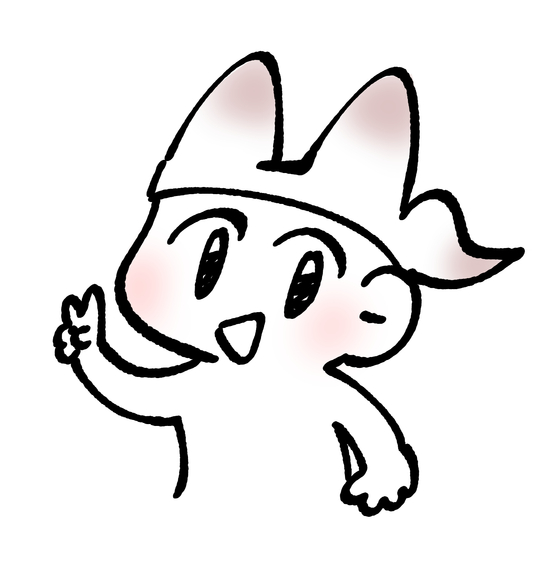 
“Cats Rule” thus began in 2020 but it was long before that when HON first started thinking about the issue of animal rights — especially about abandoned pets and the inhumane abuse street animals are exposed to. The webtoonist has had a pet dog for five years, but even from a young age, she has loved animals.

“I could even name 60 breeds of dogs,” HON said. For this work, she studied deeper into the world of cats to properly convey Qiqi’s character and form the storyline between the different species. The outcomes of the various characters are mostly based on their unique personalities, but also on the species’ instincts. For example, Casik is a cool loner because hamsters like to live alone and Morang is a loving character because dogs are social animals. One spoiler alert for Qiqi: she doesn’t kill any humans or get to take over the world.

“Qiqi knows more than anyone what it feels to be loved and be happy with humans,” said HON. “She cares for all of her friends and wants them to be happy. That’s why she wishes well for Morang when she finds a family. But if that human ever hurts Morang, then she will be plotting a very, very brutal mass murder.” 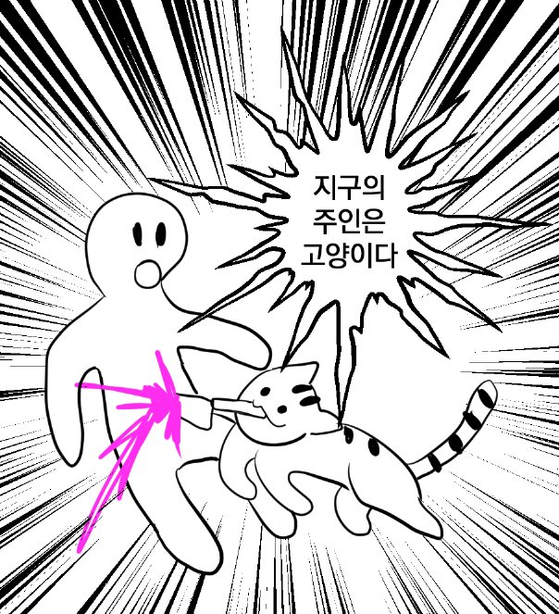 A picture webtoonist HON drew in 2017 features a cat with a knife in its mouth saying, ″Cats rule the world.″ The picture became the inspiration for ″Cats Rule the World.″ [SCREEN CAPTURE]


The prototype of “Cats Rule” came from a simple illustration that HON drew in 2017 and uploaded on Twitter, where a cat is stabbing a person with a knife and saying “Cats rule the world.” It may sound a little violent, but the simplified drawing style and the pink blood add a somewhat cute element to the gore. The post has been retweeted over 13,000 times.

“It’s still the case now, but there were so many cruel and inhumane stories going on in the world and that brought me down a lot,” HON said. “I thought that people would just laugh about it and take it as a joke, but apparently a lot of people liked it. It was quite popular for some time. I realized that people liked this style so I drew a similar series with a dog and hamster and made stickers as well. I came up with a story because I wanted to draw cartoons about it. The whole story started from that one drawing.”

An episode of Kakao Page webtoon series ″Cats Rule the World″ by HON shows Qiqi the cat telling a human to ″bog off″ but the human mistakes the message as saying ″hello″ back to her. [HON 2020/D&C WEBTOON BIZ]

“Cats Rule” mainly revolves around Qiqi’s evil schemes and how they go “miserably” awry. For instance, she tries to make humans obese to shorten their life span, but only makes people happy because of the little snacks she leaves on the streets. When she tries to take them by surprise and give them heart attacks, people scream — but in joy. But when a booby trap she makes ends up endangering a child, she halts the plan and calls it a day. As the story moves forward, readers learn why Qiqi has become so hostile toward people but at heart, means no real harm.

“At first I wanted to make a comic series that’s mainly about her evil plans — and the earlier parts of the webtoon actually do that,” HON said. “But as the story moved along, I tried to plant in information that I learned while I was preparing for the series, such as how to treat a kitten who’s lost its parents or what stresses cats out. I tried to make the series fun for younger readers but also informative, too. I wanted them to think, ‘I read it in a webtoon that I’m not supposed to do this’ and love animals in the right way.”

In no situation do the people of the village shout at Qiqi or her friends or shoo them away. HON likes to search for stories where people treat animals with kindness whenever she feels down, rather than just funny or cute videos. Those stories are what get her going, and why she drew the series. In a way, “Cats Rule” was a utopia that she dreamed of and also a way of healing herself.

“I hope that people will be kinder to animals and other people,” HON said. “I wish they wouldn’t be cruel to them or take their anger out on them or abuse them. It makes me feel better to watch videos where people feed stray cats, a person jumps into a river to save a drowning dog or a person saves a baby fox with an empty can stuck on its head or a seal with its body stuck in a net. I filled the webtoon with stories that make me feel better.”

Before “Cats Rule,” HON worked on a comic series on Lezhin Comics and other smaller projects on her own. After taking some time off, HON says she will return to her favorite genre of romance, and maybe try out another slice of life series, this time with her own dog starring as the main character.

“I will be working on new stories and new works, and I ask for your love and support,” HON said. The webtoonist added, “However precious a work is [to the creator], we could start resenting it once it gets illegally copied. I hope that readers will respect copyright [...] so that no creator abandons their work.”