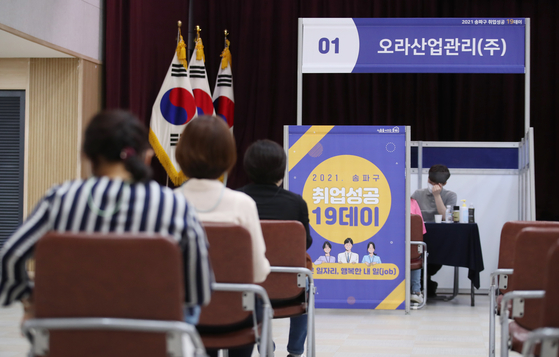 Applicants wait for interview at a job fair at the Songpa district office, Seoul, on May 12. In May more than 600,000 more people were employed compared to the previous year. [YONHAP]

Total employment grew by 619,000 jobs in May, a 2.3 percent increase compared to a year earlier and the third consecutive month of gains.

The number of people working in Korea reached 27.6 million last month, according to Statistics Korea Wednesday, and it was the second month in a row in which gains exceeded 600,000 compared to a year earlier.

The gains were seen as a signal of a solid economic recovery, Finance Minister Hong Nam-ki said.

“As the jobs recovery is becoming certain, [jobs] have recovered to more than 80 percent of the level before Covid-19,” Hong said.

Statistics Korea acknowledged that the base effect had an impact on the latest job report, meaning that figures a year ago were so low that this year's performance looks good.

“It is true that the sharp decline in employment due to Covid-19 last year affected the latest job results,” said Chung Dong-myung, head of social statistics at Statistics Korea. “However, when comparing stats on a month-on-month basis, which doesn’t include the base effect, employment has been increasing for four consecutive months, which we consider significant.”

The total number of unemployed in May declined 10 percent to 1.15 million, the biggest drop since February 2020.

By category, jobs in health and social welfare, which are heavily funded by the government, continued to be a major driver. Last month, 241,000 more were employed in this category compared to the year-earlier period, which was a 10 percent increase.

Manufacturing, which employs 16 percent of all of those with jobs, added 19,000 positions compared to the year-earlier period, a 0.4 percent year-on-year.

That was much smaller than April's 61,000 increase. Many related businesses continue to suffer from social distancing measures.


By age group, people in their 30s and 40s continued to lose the most jobs, while people 60 or older continued to get them thanks to government job programs.

Statistics Korea emphasized that a decline in the number of Koreans in their 30s and 40s was reflected in the employment figures.

Others factor at play included more manufacturing jobs for young people, and a decline in wholesale and retail jobs, often filled by people in their 30s and 40s.