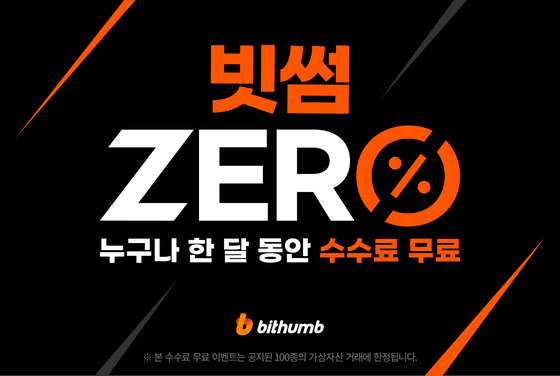 Bithumb said it will waive commissions on trading of 100 coins including dogecoin until July 8 from Wednesday. The image file above promotes the exchange's promotional event. [BITHUMB]

Bithumb announced Wednesday that it will waive trading commissions on 100 types of coins through July 8.

The promotion began from 5 a.m. Wednesday on coins including dogecoin and klaytn.

Bithumb said it picked 100 coins that users frequently trade. Bitcoin and ethereum are not included on the list.

The exchange said it is offering promotions "to thank users" as it was able to achieve record earnings last year and in the first quarter of this year as cryptocurrency trade boomed.

Bithumb Korea, which owns the exchange, posted a 222.6 billion won ($199 million) in net profit in the first quarter, up 876 percent year on year, according to a disclosure by Vidente, a major shareholder, last month.

The exchange said in statement that it "will strive to offer a more stable trading environment for users."

While earnings increased, the exchange has been struggling with systems issues. Earlier this year, it had to temporarily suspend trading a number of times due to glitches related to traffic overload.

Most recently, the exchange halted all services for about two hours and 30 minutes from 2:30 a.m. Wednesday for system maintenance and upgrade.

On its notice bulletin Tuesday, the exchange asked users to "please cancel all open orders before the maintenance" in order to protect their assets, adding that the maintenance will enable more stable service on its trading platform.

Major cryptocurrencies have been weakening recently.

News that U.S. authorities were able to recover most of the ransom paid in bitcoin to hackers that targeted Colonial Pipeline raised concerns over the security of cryptocurrencies and may have contributed to the weakness.

Crypto spring may be coming as banks get into the game