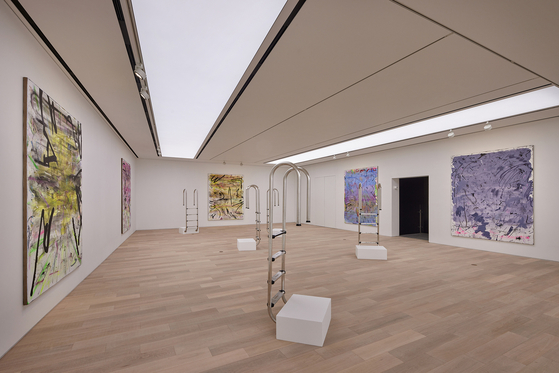 A view of the solo show of Henning Strassburger, which is the inaugural exhibition of Foundry Seoul gallery on Itaewon's mainstreet, central Seoul. [FOUNDRY SEOUL]


A new gallery Foundry Seoul and a new larger space of the world-famous Pace Gallery’s Seoul branch, as well as a new flagship store of the Italian luxury fashion brand Gucci, have each opened their doors in Hannam-dong, central Seoul, over the last few weeks, solidifying the area’s status as one of Seoul’s cultural hubs, in particular, for art and fashion.

Foundry Seoul, which will officially open on Friday, unveiled to the press on Tuesday its inaugural exhibitions — a solo show of the young Berlin-based abstract painter Henning Strassburger and an exhibition of the fashion design duo KANGHYUK that consists of Choi Kang-hyuk and Shon Sang-lak.


According to Park Se-jin, curator of the exhibitions, Strassburger creates his abstract paintings through complicated procedures, including projecting his digital drawings on a canvas and then hand-painting the projected images. He also uses color schemes inspired by the industrial CMYK color spectrum used for print technology. “In these ways, he explores the possibility of painting in the era of digital images,” Park said.

The gallery is an art dealing subsidiary newly set up by the Busan-based industrial pipe fittings manufacturer TK Corporation, which also owns the building where Gucci opened its second flagship store in Korea called Gucci Gaok on May 28. The gallery is also located in the building, but can barely be seen from the street because it is located on the lower two basement floors. 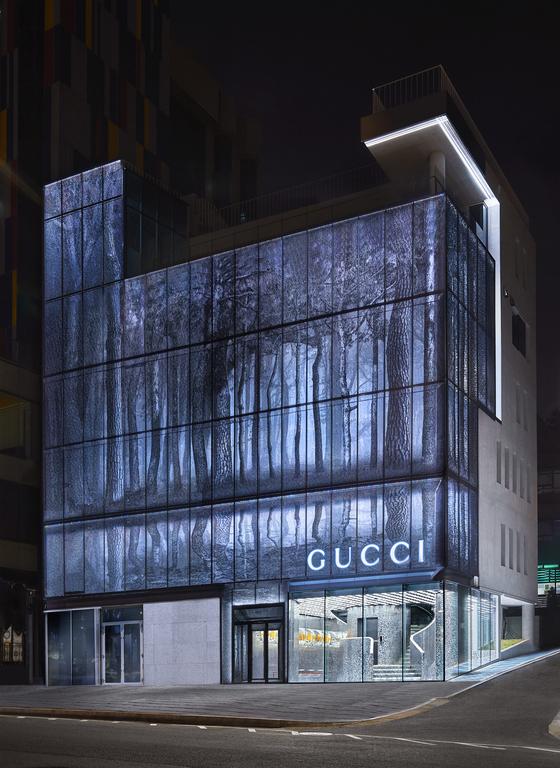 Gucci Gaok, a new flagship store of the Italian luxury brand Gucci, is in a building on Itaewon's mainstreet, which is owned by the Busan-based TK Corporation. On the basement levels of the building is Foundry Seoul, TK's new gallery business. [GUCCI KOREA]


Still, the building is very artistic, because Gucci commissioned Korean artist Park Seung-mo, whose works appeared in the Oscar-winning film “Parasite”(2019), to decorate its façade. The work depicting a pine tree forest is made of layers of stainless-steel mesh to provide different views depending on light, the viewer’s angle, and the distance.

It is a rare case in Korea that a non-art-related company sets up a subsidiary for art dealing, whereas it is common for such a company to establish a museum as part of its art patronage. Asked about it, Chloe Yoon, managing director of the new gallery and daughter of TK CEO Yoon Sung-duk, said, “We think it is also important and a more practical form of art patronage to discover young or lesser-known artists and help them work in a good environment and sell their works for proper prices. Therefore, we chose to establish a gallery instead of a museum.”

Meanwhile, Pace Gallery opened a solo show of the famous American artist Sam Gilliam on May 27 as the inaugural exhibition at its new space on the second and third floors of Le Beige Building near Leeum, Samsung Museum of Art, in Hannam-dong. When the exhibition wraps up on July 10, it will travel to Pace’s space in the H Queen’s building in Hong Kong. This suggests a change in status of the Korean art market, which had before been considered to be much less important than Hong Kong. 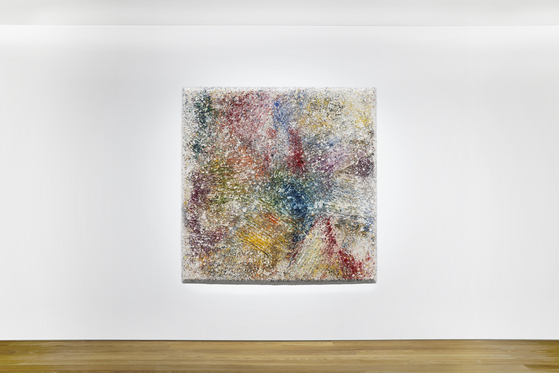 Sam Gilliam's ″Spin and Splash″(20210 is hanging in Pace Seoul as part of his solo show. [PACE SEOUL]


The exhibition features nine new pieces of so-called “beveled-edge abstract paintings” which Gilliam has been continuously developing since the 1960s. Inspired by Abstract Expressionism in the mid-20th century and American jazz music, he has created paintings of thick texture, quiet gloss and delicately-changing colors and tones, which “appear to float away from the wall, thanks to the beveled-edge frames,” said Rhee Ruri, gallery manager of Pace Seoul.

“Gilliam’s approach to abstract expression is profound and energetic, often involving folding, soaking, and staining the canvas before applying thick layers of paint mixed with materials such as pure pigment, sawdust, tin shot, and other detritus from the studio floor,” Pace wrote on its web site. “Using rakes, steel brushes, and other tools, Gilliam then exposes layers of color glowing below like fire coming through volcanic ash.”


The sliding screens of hemp cloth installed in front of some windows and glass doors of the new space harmonize with the paintings. “We invited architect Cho Minsuk of Mass Studies, who had designed the whole building, to renovate the interior of the floors for our new space and include some traditional Korean elements,” explained Rhee. 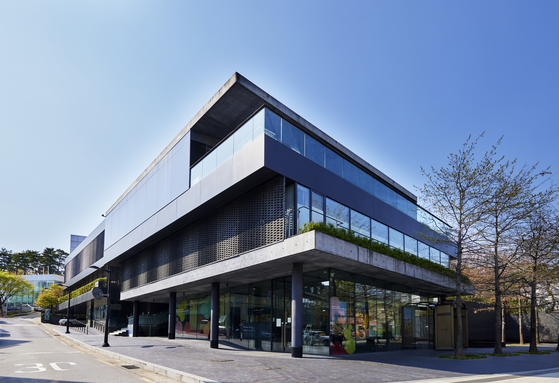 
Meanwhile, Hannam-dong, which includes the streets commonly referred to as Itaewon, has steadily grown into a major art zone in Seoul since Leeum, Samsung Museum of Art, opened there in 2004.

Now, in the area are Hyundai Card company’s Music Library and art center Storage; Gana Art Sounds and Gana Art NineOne, which are branches of Gana Art, one of Korea’s biggest galleries; the alternative art space Amado; Gallery Baton which is regarded as one of the strongest young galleries; and the musical theater Blue Square’s art exhibition spaces.

In addition, Galerie BHAK, a gallery with a 28-year-long history, and ThisWeekendRoom, a young art space which is in between a gallery and a collective, both moved to Hannam-dong from Cheongdam-dong in Gangnam late last year and early this year.


There are also the flagship stores of fashion brands such as KUHO, Comme des Garçons and Kolon’s Series Corner, which hold small art shows from time to time.

Adding to the vitality of Hannam-dong, Leeum, which has been virtually dormant since 2017, will re-open within this year when its ongoing renovation is completed, according to its representatives. Leeum abstained from special exhibitions since Samsung Group Chairman Lee Jae-yong was arrested in 2017 on charges of bribery and other offenses in the scandal that led to former President Park Geun-hye’s impeachment and then temporarily closed its doors last year due to the pandemic.


Art insiders say Hannam-dong is located between two important art zones north and south of the Han River — Samcheong-dong and Cheongdam-dong, therefore it is easy to attract collectors from both areas. Furthermore, the area has fashion and design shops as well as restaurants and cafes that will appeal to the so-called MZ generation, or those born between the early 1980s to the mid-1990s, who have emerged as new important players in the art market.