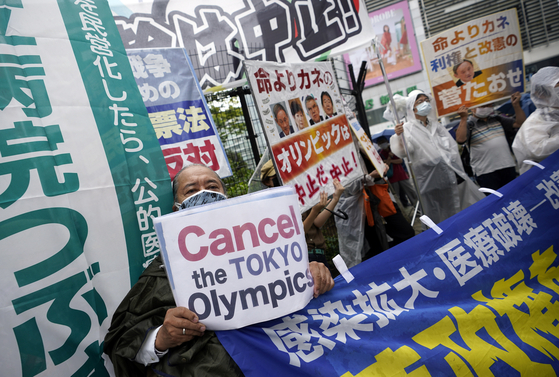 Protesters in Japan hold banners during a rally against the coming Tokyo Olympics Sunday, as the Japanese capital is still in a state of emergency and locals fear a further spread of Covid-19 with the arrival of thousands of athletes and staff from overseas. [EPA/YONHAP]


North Korea will not be part of the Tokyo Olympics, the International Olympic Committee (IOC) confirmed Tuesday, the first time it will skip the Summer Games in 33 years.

North Korea's berths for the Tokyo Olympics from July 23 to Aug. 8 were reallocated to other athletes, said the IOC.

The announcement dashed any hope of the upcoming games being used for sports diplomacy with the North. International sporting events in the past, particularly the PyeongChang Winter Olympics in 2018, were occasions for diplomatic breakthroughs.

North Korea announced in early April it would not be participating in the Tokyo Games due to Covid-19 concerns.

Pyongyang's Sports Ministry revealed its decision on April 5 following a meeting of its Olympic Committee on March 25.

The Olympic Committee of the Democratic People's Republic of Korea (DPRK) said it decided not to participate "in order to protect players from the world public health crisis caused by Covid-19."

At that time, the IOC said that it had not received an official notice of withdrawal and the Japanese government called the decision by North Korea a "unilateral" one.

The IOC has worked to have all 206 national Olympic committees, including in both Koreas, take part in the Tokyo Games.

James Macleod, the IOC's director of Olympic solidarity, said in a virtual press conference Tuesday on North Korea's decision, "The problem was they did not inform us officially [in April]. We had a lot of ongoing discussions on reasons and to offer them as many assurances as possible."

However, he said, "It got to the point where we had to make a decision on the qualified places because we didn't want to jeopardize those places for other athletes that were waiting for that."

The IOC executive board earlier Tuesday made a decision "to reallocate those four places for fairness to the other athletes," said Macleod.

The last Olympics boycotted by North Korea were the 1988 Games held in Seoul.

It joined a Soviet-led boycott of the Los Angeles Games in 1984. But North Korea has participated in every other Summer Olympics since its first in 1972.

Seoul had hoped the upcoming Games could help restart dialogue and serve as a chance for Pyongyang to talk with Washington, as happened during the PyeongChang Olympics in February 2018. For those Games, the two Koreas' athletes marched together at the opening and closing ceremonies under the Unification Flag, symbolic of a period of détente on the Korean Peninsula. They fielded a joint women's ice hockey team and high-level delegations from the North came to South Korea.

Pyongyang's decision to forgo the Olympics comes despite the Joe Biden administration announcing a new policy on North Korea with supposed room for engagement, an indicator that the regime is prioritizing health concerns.

Last month, North Korea withdrew from the 2022 FIFA World Cup in Qatar and the 2023 Asian Football Confederation (AFC) Asian Cup 2023 in China. While Pyongyang did not specify the reason, worries about the coronavirus were suspected.

North Korea has been using strict border restrictions as coronavirus prevention measures since January 2020 and officially claims to have no Covid-19 cases.

North Korea has faced delays in receiving some 1.7 million doses of AstraZeneca vaccines through the Covax facility, the World Health Organization's vaccine-sharing mechanism.

In South Korea, several political heavyweights including ruling party presidential contenders raised the possibility of a boycott of the Tokyo Games because of Japan's refusal to remove the Dokdo islets in the East Sea from a map on the official Tokyo Summer Olympics website showing the route of its torch relay.

However, Seoul's Ministry of Foreign Affairs said that South Korea is not considering boycotting the Games.

Choi Young-sam, spokesman of the Foreign Ministry, said in a press briefing Tuesday, "At this point, our government is not considering a boycott due to the Dokdo map issue," while reiterating that Dokdo is Korea's territory "historically, geographically and by international law."

Seoul has submitted a joint bid to the IOC to co-host the 2032 Summer Games with Pyongyang.