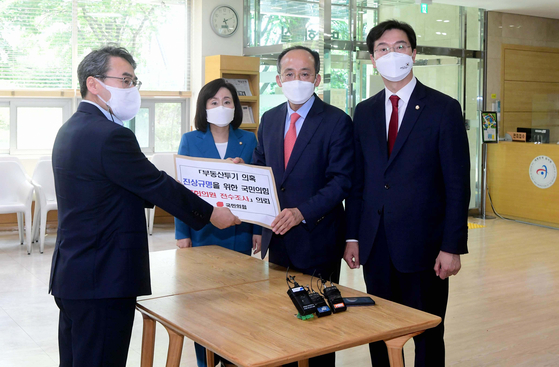 Representatives of the People Power Party (PPP), from left to right, Jun Joo-hyae, Choo Kyung-ho and Kang Min-kuk, submit their party's request to the Board of Audit and Inspections in Jongro District, central Seoul, on Wednesday for an audit of party members' real estate matters. [OH JONG-TAEK]


The opposition People Power Party (PPP) requested the Board of Audit and Inspections conduct a probe of its lawmakers' real estate matters on Tuesday, leading the ruling Democratic Party (DP) to accuse the PPP of putting on a political charade with the request.

The PPP’s request for an audit from the board comes in response to the DP’s calls for PPP lawmakers to be probed in the same manner as DP legislators were — that is, by the Anti-Corruption and Civil Rights Commission.

“We requested a probe by the board because it is a body independent of power and we trust its fairness,” said PPP spokesman Kang Min-gook, suggesting that the PPP selected the board to make the point that the opposition party does not trust the commission’s impartiality, nor the results of the commission’s probe conducted on DP lawmakers, which identified 12 DP lawmakers of having engaged in suspicious real estate transactions.

In a phone interview with the JoongAng Ilbo on Wednesday, a source at the board who spoke on the condition of anonymity said the overseeing body is not allowed to investigate, citing, “The Board of Audit and Inspection Act specifically excludes members of the legislature and the judiciary from its investigative purview.”

The law only allows the board to audit civil servants and administrative organs, according to the constitutional separation of powers between the three branches of government. As an executive branch body, the board has no authority carry out the PPP’s request to probe its lawmakers.

Members of the DP immediately lambasted the PPP’s request as a “political show.”

“The PPP almost certainly knows that public officials of the legislature and the judiciary are outside the oversight of the board,” DP chairman Song Young-gil said on Wednesday morning. “The PPP’s request for an audit by the board makes one suspect that the PPP has no intention of undergoing an inquest in the first place.”

According to an anonymous source at the PPP, the party held a closed meeting on Tuesday on the topic of whether to request a probe by the board. Some members said that public opinion might turn against the party for making a legally impermissible request, but others voiced the opinion that the board was a more impartial body than the anti-corruption commission, which is headed by a former DP lawmaker, Jeon Hyun-hee.

The PPP also criticized the probe by the commission, which they said was inclined to minimize the political fallout for the DP, and the DP’s response.

“Past experience shows that the DP expels members then quietly lets them back in,” Kang said on Tuesday of the DP leadership’s decision to request the 12 lawmakers named in the commission’s report voluntarily leave the party. “I also wonder if the DP deliberately requested a probe from the commission, headed by a former DP lawmaker, in order to bury greater truths by exposing lesser problems.”

Kang called the commission’s probe into DP lawmakers’ real estate matters “a self-investigation,” adding, “How can people trust a two-faced party that strangles them in the name of controlling housing prices, but then engages in shady land purchases behind their backs?”

Parties agree counsel probe into LH and gov't is necessary