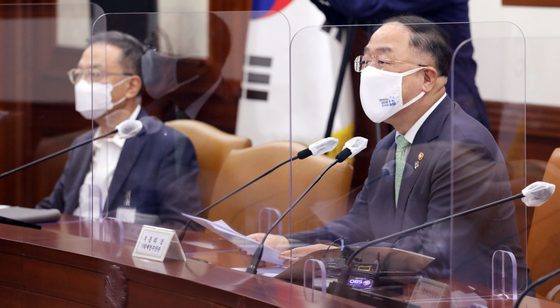 
Finance Minister Hong Nam-ki said the government will funnel money into industrial areas that are expected to thrive in the future, including auto parts for new types of cars.

It also hopes Korea can become one of the top five developers of new types of drugs in the world.

That would be an addition of 100 companies annually over the next three years.

It wants Korea to have 250 auto parts companies that specialize in both local sales and exports.

“It is exceptionally important to quickly transition the automotive parts industry’s ecosystem to cars of the future,” Hong said during a government meeting on the so-called "big three" industries for the future -- cars, semiconductor foundries and biopharmaceuticals – held Thursday.

For car parts, one goal is to expand into materials that will be used in the future. Through its “smart bridge” project, the government will search for promising start-ups and connect them with leading parts suppliers, while also providing various kinds of support including business consulting.

It will also support R&D and investments through a 500 billion won ($447 million) fund for manufacturers devoted to future car technologies and establish a data system that will accumulate information on parts performance and test driving results.

Hong said the government will help educate and train 10,000 people in the auto parts industry by 2027.

“While the paradigm is shifting from combustion engines to electric and hydrogen-fueled cars, that demands that parts suppliers change as well,” Hong said. “However, because parts suppliers are mostly small companies and their level of technology is low, transitioning [to future car technologies] is urgent,” Hong said.

The government will elaborate on its support plans for car parts suppliers in September.

“Companies need to act quickly to reorganize their businesses to take advantage of the big [global] semiconductor cycle,” Hong said.

“We are quickly becoming a major powerhouse in the comprehensive semiconductor market through the confirmation and execution of the 510 trillion won 'K-semiconductor' strategy and the $18 billion investment plan in the U.S. that was announced at the summit [between U.S. President Joe Biden and President Moon Jae-in],” Hong said.

On becoming a top five developer of new drugs within a decade, the government will adopt smart technologies to speed up the testing of new drugs and establish a network to share test results.

Hong said the government will help educate 1,600 people specializing in drug testing this year and raise that number to 10,000 by 2025.

A government-backed fund of 2.2 trillion won will be used for new drug research, and set up a center in Boston to help Korean companies find consulting and testing help from U.S. drug companies.