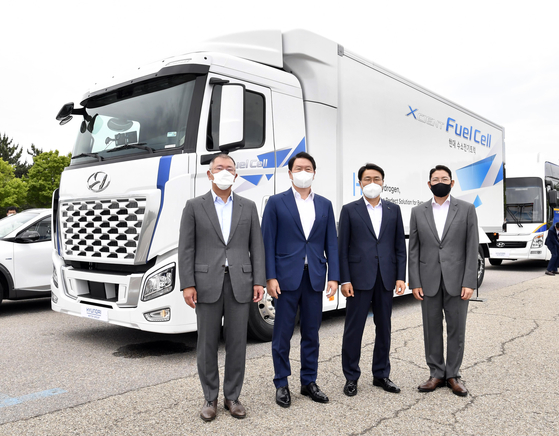 The heads of four Korean business groups met Thursday to form a committee dedicated to investment and business opportunities in hydrogen.

The committee is expected to be launched in September after confirming additional members.

Hyundai, SK and Posco will co-chair the committee.

It is expected to be the Korean equivalent of the Hydrogen Council, a global lobbying group with 109 member companies from more than 20 countries. Launched in 2017, that committee encourages investments, holds forums and releases reports to promote the clean source of energy.

"The committee will encourage investment and hold regular forums and meetings to expand the value chain of the hydrogen industry," Hyundai Motor said in a release Thursday, "The committee will contribute actively on achieving net zero carbon emissions."

The four founding members of the committee have taken early starts in exploring opportunities in hydrogen.

Hyundai Motor is the world’s biggest manufacturer of hydrogen-powered vehicles, accounting for 69 percent of the nascent market last year. Its hydrogen-powered Nexo SUV sold more than 6,000 units last year, a 33.6 percent jump from the year before, according to data from market tracker SNE Research.

Hyundai Motor aims to produce 500,000 units of hydrogen vehicles and 700,000 hydrogen fuel cell systems for other vehicle manufacturers by 2030.

SK Group, which has created a dedicated hydrogen business team, plans to produce a total of 280,000 tons of hydrogen by 2025, 30,000 tons of which will be a byproduct of its oil refining process.

Earlier this year, SK Group said it will invest a total of 18.5 trillion won over the next five years in its hydrogen energy businesses.

Posco Group, Korea’s No. 1 steelmaker, also has ambitions for the use of hydrogen that is a byproduct of its steel manufacturing process. It currently is able to produce 7,000 tons of byproduct hydrogen annually. The group wants to take the production capacity to 5 million tons by 2050.

Hyosung Group which makes textiles and chemicals, is building a liquid hydrogen factory in Ulsan capable of producing 13,000 tons per year in partnership with American-German industrial gas producer Linde by 2023.