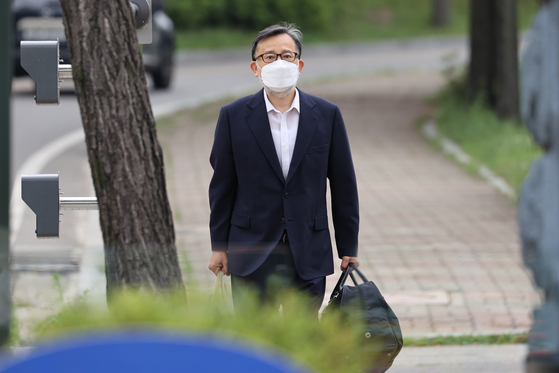 
The Supreme Court on Thursday rejected former Vice Justice Minister Kim Hak-ui's conviction for bribery, calling into question the reliability of a witness's testimony against him, and sent the case back to the appeals court for a retrial.

The case, which became known as the "sexual bribery" case, led to further investigations of Kim's dealings with other businessmen. Last October, the Seoul High Court reversed a previous not guilty verdict and sentenced Kim to two and a half years in prison for taking about 43 million won ($38,500) in bribes from Choi between 2000 and 2011.

Justice Lee Heung-gu, who presided over the case in the Supreme Court, said the prosecution had failed to refute the possibility that a key witness — a businessman only identified by the surname Choi — could have altered testimony central to Kim's conviction under pressure from investigators.

Choi initially denied bribing Kim but later changed his position as he was interrogated by investigators.

The judge said the prosecutors should prove that the witness did not feel compelled to change his evidence.

The Supreme Court allowed Kim to be freed on bail, eight months after he was imprisoned for bribery.


In October, the Seoul High Court acquitted Kim of accepting bribes and escort services between 2006 and 2008 from Yoon.

Kim was probed by prosecutors and police over various suspicions between 2013 and 2014, but he was cleared of all charges due to lack of evidence.

However, a special team of prosecutors resumed the probe in March 2019, following an order from President Moon Jae-in, leading to his indictment in June 2019 on charges of receiving bribes and sexual favors. He was cleared of all charges by a district court.

Kim was also subject to an illegal travel ban that the Ministry of Justice imposed in March 2019 to stop him from leaving the country.

In that case, Lee Sung-yoon, chief of the Seoul High Prosecutor Office, was indicted for allegedly exercising undue influence in 2019 to block an investigation into officials involved in the travel ban.

Police must prove themselves (KOR)

Police must prove themselves