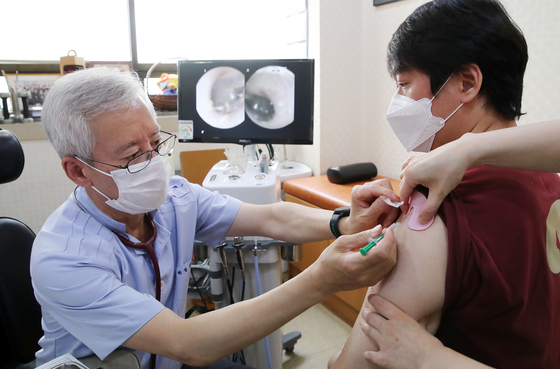 A citizen receives a shot of Janssen's Covid-19 vaccine at a medical center in Songpa District, southern Seoul, on the first day of Korea's Janssen inoculation on Thursday. [NEWS1]


Gyms and indoor golf driving ranges in some parts of Seoul will be allowed to stay open until midnight starting from Saturday in an effort to help revive small businesses hit by the coronavirus pandemic.

The Seoul Metropolitan Government announced that it will allow selected indoor gyms and indoor golf driving ranges in Mapo District, western Seoul, and Gangdong District, eastern Seoul, to extend their business hours from 10 p.m. to midnight over a one-month trial period.

The selected facilities must adhere to strengthened preventive measures, including ventilation, mask wearing, pre-emptive Covid-19 testing and limiting the number of customers after 10 p.m.

Workers at the facilities will be required to take pre-emptive Covid-19 tests at nearby temporary screening centers every two weeks.

“Gyms and indoor golf driving ranges were chosen because they run on a membership basis, which makes it easier to keep track of users, and because they typically stay open late,” said Park Yoo-mi, the Seoul city government’s director of public health, during a press briefing on Thursday.

The two districts were chosen for their good records on containing Covid-19 and the distance between each other, Park added.

The two district offices will start receiving applications from Thursday, and the city expects around 170 facilities from each district to be selected to be part of the pilot program.

Under the current Level 2 social distancing scheme, many small businesses, such as restaurants, cafes and indoor sports facilities, must close by 10 p.m. while maintaining distances of at least 2 meters (6.6 feet) among customers.

After Seoul Mayor Oh Se-hoon took office in April, he declared the government would find ways to allow these businesses to operate longer and entertain more customers, and introduced over-the-counter home test kits.

Initially, Seoul City considered including various industries from which to lift restrictions, including hagwon (private cram schools) and cafes, but reduced the target range after additional discussions on the pilot project.

"Swimming pools and hagwon […] were not included because we agreed that extending business hours wouldn't result in any significant benefits,” explained Park.

Restaurants, cafes and noraebang (singing rooms) would have much to gain from extended hours but were excluded as visitors mostly take off their masks in those environments and there have been many recent outbreaks traced to such places, she said.

"The city has been looking for 'win-win’ preventive measures to help small business owners and the self-employed resolve economic difficulties while still complying with social distancing rules.”

There were two additional virus deaths, raising the total to 1,979, the Korea Disease Control and Prevention Agency (KDCA) said.

On Thursday, Korea began inoculation of the one-dose Janssen vaccine by Johnson & Johnson sent by the United States for around 894,000 military reservists, civil defense corps and people related to the country's defense and foreign affairs.

Health authorities are planning to administer the Moderna vaccine, the fourth vaccine approved in the country, starting next week. 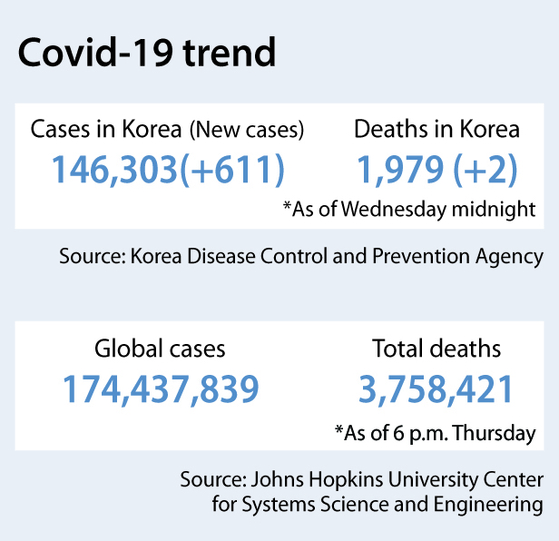 More people are expected to participate in the vaccination campaign as Korea adds tempting incentives for people who get vaccinated. The government announced Wednesday that fully-vaccinated tourists traveling in groups will be allowed to travel to countries where the Covid-19 outbreak has subsided, including Singapore, Taiwan and Guam, as early as next month, without having to go under the 14-day quarantine.