Ra Jong-yil
The author, a former Korean ambassador to Japan, is a chair professor at Gachon University


As the National Intelligence Service (NIS) celebrates its 60th anniversary this year, it has added a fifth motto. The new motto, “Limitless Loyalty and Devotion to the Nation and the People,” was taken from President Moon Jae-in’s remarks when he visited the top spy agency in July 2018. The nation’s intelligence agency, which began as the Korean Central Intelligence Agency (KCIA) on June 10, 1961, has changed its name twice — from the KCIA to the National Safety Planning Department in 1980 and to the NIS in 1999. Carving the new motto on the stone and pledging a new beginning is no longer unfamiliar.

I am not going to discuss the honor and disgrace, merits and faults over the past 60 years. But I want to pay attention to fact that a star has been added to the “Nameless Stars” structure installed at the NIS headquarters in memory of the intelligence officers who died in duty. Political deviations of the NIS deserve criticism, but it is worth noting the sacrifice of the intelligence officers.

In its 60th year, the NIS must pursue reform to correct its faults constantly. In the process, Korea’s unique challenges must be taken into account. The most basic common knowledge of information is to strictly distinguish policy from information. When information and policy are combined, distortion of information follows. In other words, information can be collected and processed in a way that is favorable to a certain policy.

If there have been dark side to the NIS’ history of 60 years, a considerable part of the accountability may be with politicians who used the NIS politically, rather than the NIS itself. When an administration changes, it has been customary to replace the NIS head, reshuffle the organization and dramatically change the direction. Tenure for the director, which is the minimum measure to prevent a sudden shift, hasn’t been fixed despite many reforms and promises. 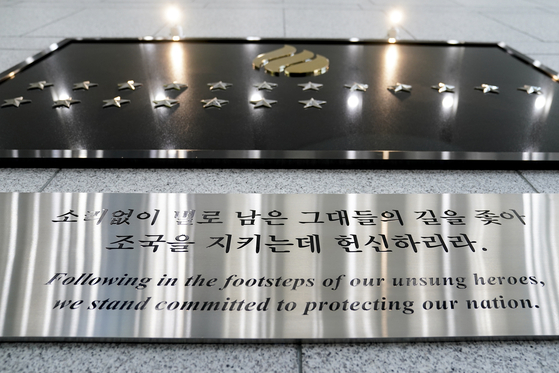 The ‘Nameless Stars’ structure installed at the NIS headquarters in memory of intelligence officers who died while on duty.

The anti-communist investigative authority of the NIS was transferred to the police in a reform. As the espionage investigation requires international exchanges and cooperation as well as accumulated experience and knowledge in the field, the job should be handled by the NIS. I am not convinced it should be under the police, which openly carries out duties. In the age of multidirectional information war at home and abroad, espionage investigation is not simply an inter-Korean issue. Considering a foreign media report that the U.S. intelligence agency was secretly wiretapping politicians and high-level officials of major European allies, espionage investigation is an important issue in the relations with friendly states.

North Korea has long demanded that the NIS and the National Security Act be dismantled. As the assassination of Kim Jong-nam, North Korean leader Kim Jong-un’s half-brother, in an airport in Malaysis shows, North Korea has outstanding external operational capabilities and has focused on the activities. From Pyongyang’s standpoint, it cannot help thinking the NIS and the National Security Act are obstacles to their operations against South Korea.

I don’t oppose inter-Korean peace, reconciliation, exchange and cooperation. But along with hopes, reality needs to be faced straight. I want to conclude with a quote from former NIS chief Shin Kuhn. “For the success of the Sunshine Policy, North Korean spies must be hunted down. Reconciliation and cooperation will be possible only when North Korea realizes it cannot achieve its goal through espionage activities against South Korea.”