Is popcorn to blame?

Is popcorn to blame? 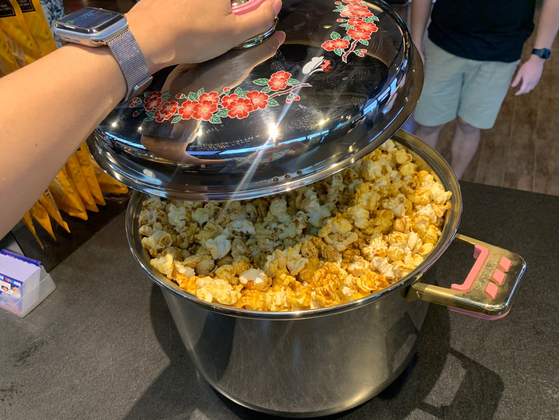 I wondered how people were actually serious about a popcorn event at a multiplex theater chain on June 5, World Environment Day. To discourage the use of disposable containers, reusable food containers with a lid would be filled with popcorn for 6,000 won ($5.40). Some brought kimchi containers while others presented ice boxes, steamers and even kimchi pots. More than 20,000 people joined the event, and reviewers wrote that they had eaten their first theater popcorn in a long time.

It was a World Environment Day event, but another motive was obvious. The theater chains must have wanted to appeal to customers who bought the popcorn but couldn’t eat it as popcorn is not to be consumed at theaters. The industry claims that it was too much to restrict food consumption at theaters regardless of the distancing level. Before and after the food consumption restriction in March, no infection has been confirmed inside theaters, and as coffee and beverages are allowed, they resent the “popcorn ban.”

Popcorn and theaters are inseparable, as seen by the term “popcorn movies.” The popcorn industry expanded in the 1930s during the Great Depression in the United States, as snacks became common at movie theaters. As theaters monopolized these “money-popping machines,” half of earnings came from popcorn at one point. In Korea, the second biggest source of income of CGV after ticket sales at 65.4 percent was concession sales at 16.5 percent, far higher than ad sales at 9.3 percent in 2019.

Since the Covid-19 pandemic, theaters have worked on packaging and delivering popcorn to make up for lost revenue, and customers enjoyed CGV popcorn while watching Netflix and other online video services. Of course, the taste is not the same. You only truly enjoy theater popcorn when you are chewing it, trying not to bother other audience members, as the tension in the movie eases.

As vaccinations are on the rise, theater popcorn will be back soon. The problem is that allowing popcorn consumption won’t likely bring back the viewers. Movies that attracted more than one million viewers this year are far from the so-called “popcorn movies.” The movie “Soul” reminded me of the power of Pixar and music, and I was already familiar with the story of “Demon Slayer” on Netflix before the theater version was released.

I am worried that no Korean film had more than one million viewers. Until May, Korean movies had 20.7 percent share of theater seats, yielding the largest audience share in theater releases for the first time in four years since 2017, compared to American movies at 56.1 percent. Do you also blame popcorn for this?