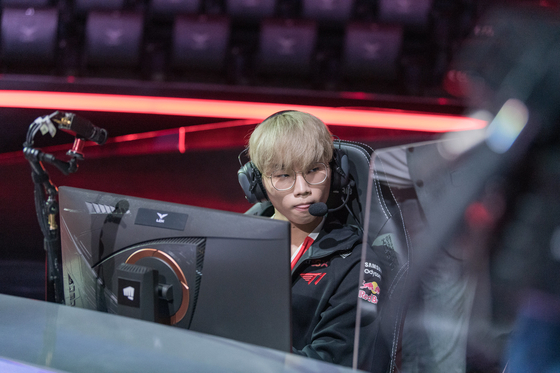 T1's top laner Kim ″Canna″ Chang-dong getting ready on the LoL Park stage prior to the team's match against Hanwha Life Esports, which was played on Wednesday evening. [RIOT GAMES]


T1 kicked off its 2021 League of Legends Champions Korea Summer Split campaign with a clean 2-0 victory over Hanwha Life Esports, on Wednesday evening.

The match was played at LoL Park in Jongno, central Seoul, with a limited live audience of around 40 present, marking a long-awaited return by LCK to its usual venue. In-person post-match interviews with press were finally resumed as well.

Q. How are you feeling about the win?

A. I really wanted to win, as it was the opening match. Since we ended up winning in a clean 2-0, I'm feeling really great right now.


Q. You've defeated HLE the last 5 times you've faced the team, and made that 6 with today's win. Did you go into today's match with that in mind?

A. No, I had no idea. I just learned that right now.


Q. Over the two games today, many fans would agree that the most memorable moment was the play when Lee "Faker" Sang-hyeok exclaimed "we moved as one". Is team coordination very much on point right now?

A. Yes. After our slump [in spring], over the course of practicing for summer, I think we really improved a lot. Right now, we're completely thinking and moving as one. So I would agree with what was said.


Q. Would it be accurate to say that establishing five fixed starters gave the lineup more room to work on team coordination?

A. Yes, I'd say looking at it that way is fine.


Q. You got off to a great start today, but your next match will be against DWG KIA. Are you feeling nervous?

A. Yes. As DWG KIA is considered the best performing team in LCK, I'd hoped that we'd meet them last, so we could face them after having trained a lot. It's a bit of a shame to meet them so early.


Q. What are your thoughts ahead of the DWG KIA match?

A. This season, from this summer split onwards, many champions will be viable in the top lane. So this time I think things will be different.