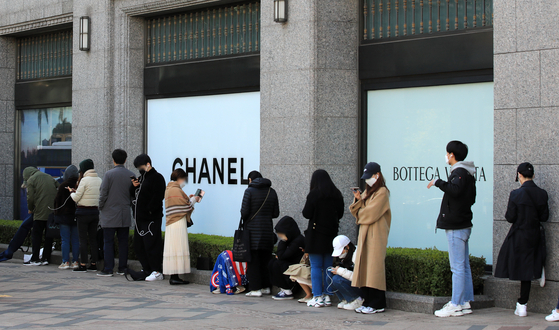 People line up at a department store in Seoul. High-end brands carry only a limited number of products per venue, and many Koreans choose to line up even before department stores open in order to get what they want. [NEWS1]


Luxury brands are raising prices, but Koreans don’t seem to be bothered one bit.

On chat sites, posts ask whether the prices of luxury products have increased. Expected dates of price hikes and the size of the jumps are some of the most frequent questions.

Customers keep their eyes open for signs of price increases, since the major fashion houses are wasting no time in pushing the limits.

Just this year, Louis Vuitton increased prices five times, while Chanel raised them twice and Hermes once. Prices of Prada’s products were raised five times and Burberry and Celine twice.

In the past, those brands used to change prices only once or twice a year and by five to 20 percent. Now, they are increasing the prices more often and by two to three percent at a time. With frequent increases, consumers consider luxury goods to be cheaper today than tomorrow.

After Chanel upped prices in January and February, rumors that the brand will again increase prices spread online starting mid-April. Knowing that Chanel had increased prices as much as 30 percent last May and November, Koreans rushed to purchase Chanel bags, joining long lines in front of department stores even before the doors were opened.

The chatter started with purchasing agents in the United States and Europe, who claimed that employees at the luxury brands had tipped them off. No dates were given, and it was all hints and suggestions.

As nobody really knows, the only choice for the dedicated customer is to prepare for the inevitable and get in line. 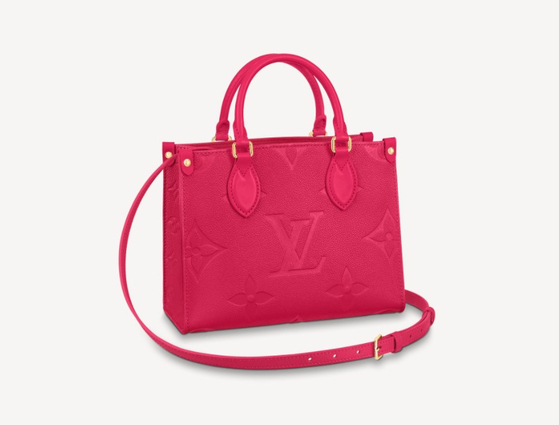 
“I don't know when the prices will go up, so I took a day off at work to wait in line before the department store opened to make a purchase,” an anonymous post online read.

Others claimed that they were not that interested, but joined in because of the rumors.

Luxury brands say there are three big reasons why they have no choice but to raise the prices: decision at the head office to change the pricing policy, exchange rate fluctuations and increases in costs of raw materials and labor.

Raw materials and labor costs aren’t that big enough to push numerous prices changes every year, so the management’s pricing policy decision is assumed to be the driving factor.

Some say that designer brands decided to raise prices because the pandemic took a toll on their earnings.

“Brands rushed to increase prices in an effort to defend their bottom lines,” said Luca Solca, a managing director at Bernstein, to Business of Fashion in April. “After all, these are largely fixed-cost businesses, so maintaining sales – either through price or volume – is of the essence.”

According to a report by Deloitte, Prada’s prices rose 13 percent on average globally in 2020, Louis Vuitton’s prices by 10 percent and Balenciaga's 8 percent.

The increase in luxury product prices is a common trend worldwide, but Asian consumers are less sensitive to the price increases.

Despite higher prices, customers from China and Korea have been purchasing more goods during the pandemic, compared to those in the United States and Europe. Some Koreans even say that they don’t mind that prices are going up.

Many are scrambling to get their hands on the designer goods as demand is rising, but brands only have a limited supply. Travel is almost impossible during the pandemic, and those who would have bought the bags overseas are turning to local department stores. Designer bags are a good wedding gift, adding to the popularity.

For the companies, this mindset makes the marketing.

“Increasing prices drives up the scarcity and popularity of luxury goods because they’re unique items that are valued more when they’re harder to get,” said Lee Jung-min, CEO of Trend Lab 506. “Price change rumors are quick to spread in Korea, which even serves as an effective marketing strategy.”